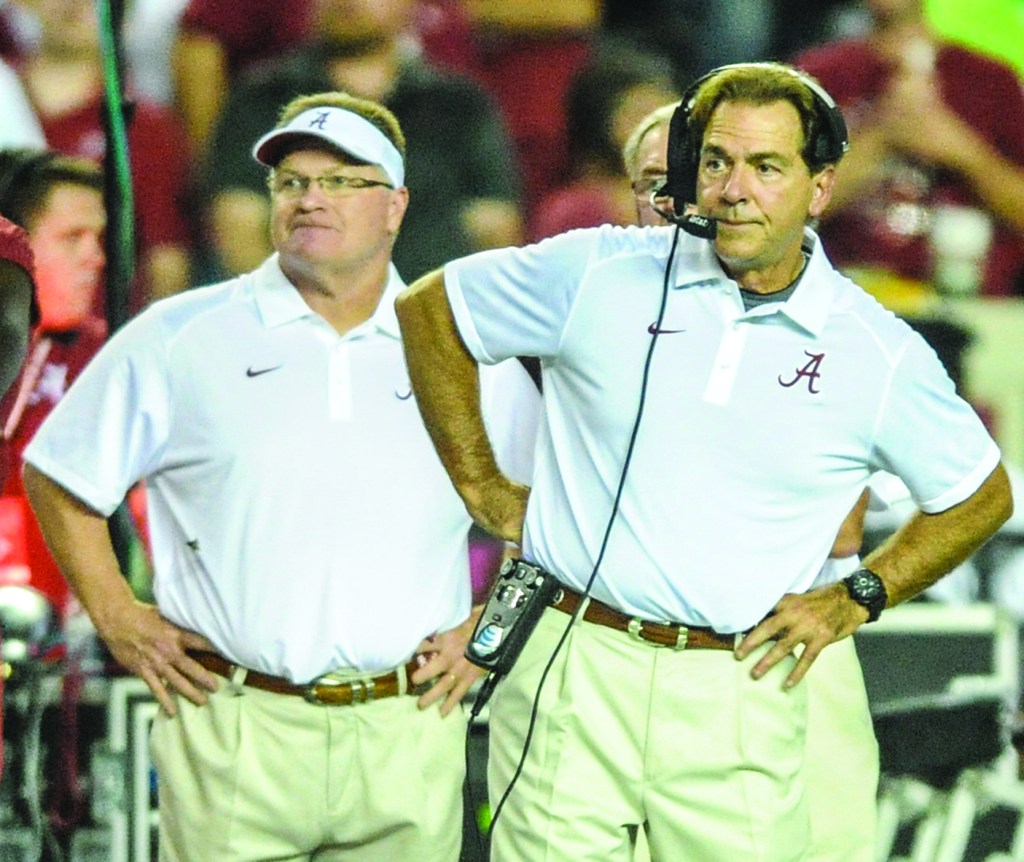 Not much has changed for Nick Saban’s Alabama team, which again is leaning on a stout defense and more skilled players stepping in at key positions on offense heading into Saturday’s game against Ole Miss. (Bruce Newman)

Hugh Freeze is only in his fifth year as a head coach in the Southeastern Conference, but Ole Miss’ coach has been around long enough to know what to expect when going up against Nick Saban’s team.

A strong running game and suffocating defense have been staples of Alabama’s recent dominance. The top-ranked Crimson Tide have used the formula to win three of the last four Southeastern Conference championships and four of the last seven national titles.

The defending national champions have added a wrinkle here and there to keep up with the times, but the Crimson Tide look like they normally do heading into this week’s showdown with No. 19 Ole Miss on Saturday at Vaught-Hemingway Stadium (2:30 p.m., CBS).

“It is a typical Alabama football team that is going to be in the hunt for the SEC championship and the NCAA championship if that comes to creation,” Freeze said Monday.

If anything, Alabama (2-0) is “a little quicker twitched” on defense, particularly up front with arguably the nation’s deepest and most talented defensive front, Freeze said. Alabama is allowing just north of 216 yards and 8 points a game with the defense scoring more touchdowns (2) than it’s allowed (1).

An improved secondary has been responsible for both. Sophomore cornerback Marlon Humphrey returned an interception for a touchdown in Alabama’s 52-6 pasting of Southern California while

All-American safety Eddie Jackson had a pick-6 of his own last week against Western Kentucky.

“They’ve always got some nice size with big guys,” tight end Evan Engram said. “Their linebackers are kind of a little bit more slim and move a lot better, and their secondary is really good. I think that’s the most they’ve improved on is their secondary. I think all the guys they had last year are back, and they look really good on film in all type of coverages.”

Former five-star signee Bo Scarbrough has stepped in to help Alabama average 183 rushing yards even with reigning Heisman Trophy winner Derrick Henry off to the NFL, but the Crimson Tide have found balance with a downfield passing attack operated by newcomer Jalen Hurts that’s made defenses pay when focusing too much of their attention in the backfield.

Hurts became the first true freshman to start a game at quarterback for Alabama last week since Vince Sutton did it in 1984 and has looked anything but overwhelmed. The 6-foot-2, 209-pounder has completed nearly 62 percent of his passes for 405 yards and four touchdowns against just one interception.

Another test
Ole Miss’ new-look secondary, which has sophomore Zedrick Woods and true freshman Myles Hartsfield at the safety spots and Carlos Davis taking over for the injured Ken Webster at corner, saw just nine passes last week from Wofford but struggled against Florida State redshirt freshman quarterback Deondre Francois, who carved up the Rebels for 419 yards and two scores in the Seminoles’ 45-34 win on Labor Day night.

“They’re similar. Big arms. Athletic. Can give you problems for sure,” Freeze said of the two quarterbacks. “(Hurts) has been extremely accurate on vertical throws downfield, and they have receivers who can go get it. They force you to commit people to stopping the run. They do a great job with their splits with receivers, and that can give you some issues.”

Having already seen Florida State’s athletes means the Rebels won’t have to get up to speed Saturday, but any chance Ole Miss has of winning for the third straight year in the series starts with not beating itself against a team from which the Rebels know exactly what they’re getting.

“Going onto another great team like Alabama, we really have to harp on protecting the ball, and that starts this week in practice,” said quarterback Chad Kelly, who had a turnover-free day against Wofford. “I really have to take what the defense gives me, and we should be good.”