Super Typhoon Meranti’s 2016 path shows the storm will strike southern Taiwan tonight with heavy winds and severe flooding before taking aim at the city of Xiamen on the China mainland.

Typoon Meranti’s winds are currently 185 miles per hour as of late Tuesday morning and waves near the storm’s center are reportedly 48 feet high, according to weather.com. It is one of the strongest typhoons in the world this year.

Super Typhoon Meranti’s track is expected to reach Xiamen and the China mainland on Thursday. That area is Asia is 12 hours ahead of the United States and these strikes times are in local time where the storm is expected to strike. 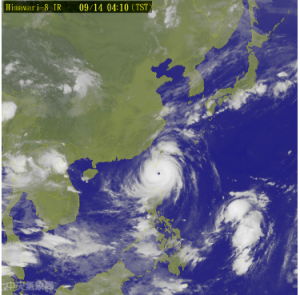 Taiwan’s Central Weather Bureau has issued a typhoon warning for central and southern parts of the county and cities in the storm’s path include Tainan City and Kaohsuing City.

Rainfall in southern Taiwan is expected to be 12 to 18 inches, possibly more. The same amount of rain is expected when the storm strikes at or near Xiamen on Thursday.

The biggest question is hard strong Typhoon Meranti’s winds will be when it reaches the China mainland. It is possible the mountainous terrain of Taiwan could disrupt the storm but the rainfall isn’t expected to subside regardless