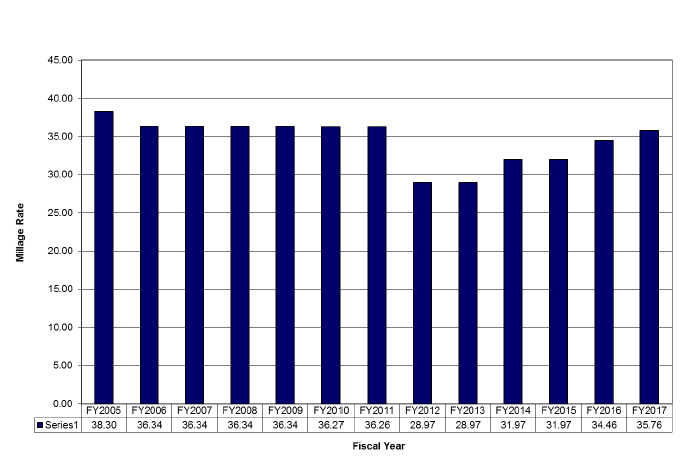 The Lafayette County Board of Supervisors approved the 2017 fiscal year budget, as well as a 1.3 mills tax levy with no comment from the community during their meeting Monday night.

The three-tenths mill increase, or just over $164,000, will go to the local Economic Development Foundation budget. In the past, that contribution came through the Local and Private Committee in the state legislature. However, this year House Speaker Philip Gunn killed the bills in the committee before they could go for a vote before the House and Senate.

The other one mill, or more than $561,000, will be used for future bonds on the West Oxford Loop extension and Sisk Avenue projects. The county entered into an agreement with Oxford and university officials on both projects. The one mill increase would also be used for some of the county offices that will have to be relocated after the Mississippi Department of Transportation purchased a portion of the buildings on Highway 7 south.

“One mill is in anticipation of the bonds we plan to issue,” County Administrator Lisa Carwyle said. “That will not go into effect until the following year, but it would be about a two mill increase at that point, so we thought a gradual increase would be better than hitting everybody at once.”

“The increase is not from expenses from this year, but it is future development we are anticipating,” Board President Jeff Busby said.

“We’re still operating roughly at five mills lower than they were 12 years ago,” added District 3 Supervisor Mike Roberts. “The price for everything keeps going up, but we are still low.”

This year’s budget includes raises for county employees, as well as equipment upgrades for the sanitation and public service departments.

Public safety takes up a majority of expenses with 42 percent devoted to protecting the county, while 39 percent is for county government services and 15 percent is used for the courts. Debt service takes up three percent and one percent goes to health, welfare and economic development.