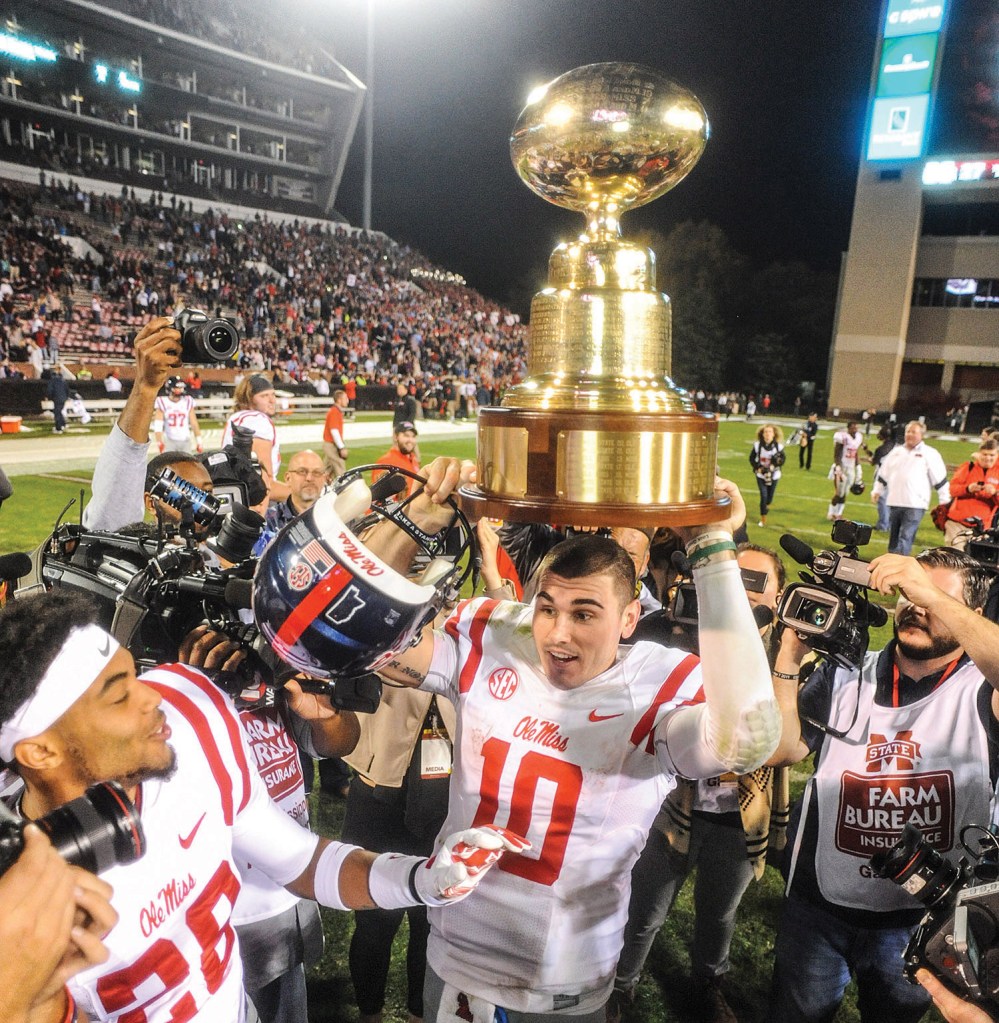 Quarterback Chad Kelly holds the Golden Egg following Ole Miss’ win over Mississippi State at Scott Field in Starkville on Nov. 28, 2015. The Egg Bowl will be played on Thanksgiving next season. (Bruce Newman)

Ole Miss and Mississippi State fans will have to once again work a football game into their Thanksgiving Day plans beginning next year.

The Southeastern Conference released each team’s full schedule for next season Tuesday night, announcing the schools have entered a multi-year agreement to play the Egg Bowl on Thanksgiving night. ESPN first reported the move.

The Egg Bowl was last played on Thanksgiving in 2013 — a 17-10 Mississippi State win in overtime. This year’s game will be played at Vaught-Hemingway Stadium on Nov. 26.

A common theme in Ole Miss’ wins over Alabama the last two years has been an advantage in the turnover department. The Rebels took the ball away twice in 2014 compared to Alabama’s one and forced five turnovers in last year’s win in Tuscaloosa, setting the offense up with numerous short fields in a 43-37 victory.

“When you play a really good defense, the two things that you need to do to win a football game are hit some big plays and protect the football,” offensive coordinator Dan Werner said. “We did both of those in those games, and that was the difference.”

Ole Miss hasn’t been as opportunistic through the first two games this season, taking the ball away just once. Alabama is 61-1 under Nick Saban since 2008 when winning the turnover battle.

“We haven’t gotten much turnovers,” cornerback Carlos Davis said. “We’re the landshark defense, and we’re known for getting turnovers, so I feel like we just have to get more turnovers this week.”

Davis has been one of Ole Miss’ top options returning punts the last couple of seasons but had his return duties limited to kickoffs last week with the Rebels needing him more on defense.

But Davis said he was back returning punts during Tuesday’s practice. Davis, one of the fastest players on the roster, returned a kickoff 62 yards against Wofford last week.

“(The coaches) have got me back there this week,” Davis said.