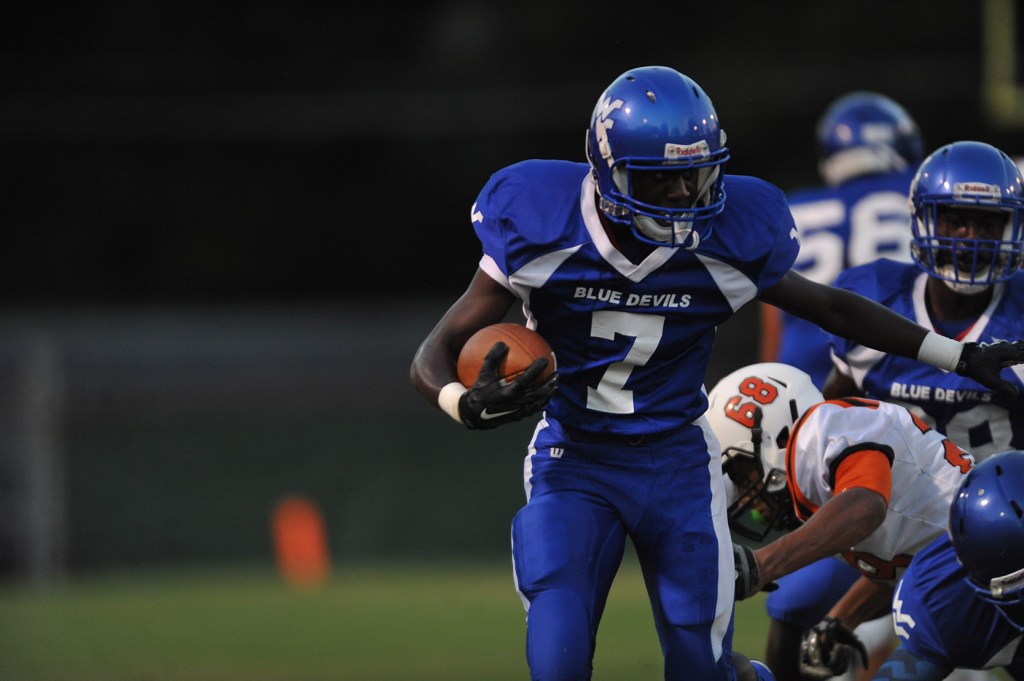 Martavius Rockett (7) and the rest of the Blue Devils will play their fourth road game in five weeks Friday at Senatobia. (Bruce Newman)

Head coach Brad Embry knew his team was young and the experience level was very low heading into this season. He did not know the first four weeks would play out like they have.

After a 57-14 loss at Pontotoc last week, their second loss in a row, Water Valley is searching for something, anything positive to happen.

“First four weeks definitely haven’t gone the way we intended,” Embry said. “A lot of things have contributed to that. First off, I give credit to our opponents. We’ve played some pretty great opponents and will continue to play good opponents. We haven’t always taken advantage of opportunities we’ve had.”

A week ago, Embry was trying to find anyone, or multiple players, to step up and take a leadership position on the team heading into the Pontotoc game. The result on the scoreboard did not reflect it, but the game and the first few days of practice this week have shown that a few Blue Devils may have been listening.

“Maybe that was a wake-up call,” Embry said. “Not necessarily for anything else other than to say, ‘Dang, this is really who we are. We can’t explain it away anymore.’ We’ve got a bunch of good kids. We’ve just got to learn to turn that good kid into a guy that’s mentally focused and attention to detail. We’ve got to learn to play with that controlled aggression.”

Focusing on themselves
It is Week 5 of the high school football season, and Water Valley is one week away from jumping into Region 1-3A play against perennial powerhouse Charleston. Most teams are able to start looking at opponents’ game film each week and game plan for them at this point of the season. Water Valley is still trying to correct mistakes it is making and is continuing to do so even with a tough Senatobia team coming up Friday.

“I’m more concerned about how we play and we prepare right now,” Embry said. “We’ve got to get that part accomplished first. That’s our biggest goal right now is to play the best we can play and let’s see what that is. Because I don’t know. We’re not even close to figuring that out.”

The Warriors (3-1) come into the game winners of their last two, including a 27-20 overtime win at Charleston last week. Senior quarterback Cooper Stevens leads Senatobia’s offense with 219 yards on 25 of 35 passing with two touchdowns and two interceptions. Freshman John Michael Foster has  played in two games and also thrown for 219 yards on 9 of 20 passing. Senior running back Maurice Toney leads the ground game with 208 yards on 26 carries and two touchdowns.