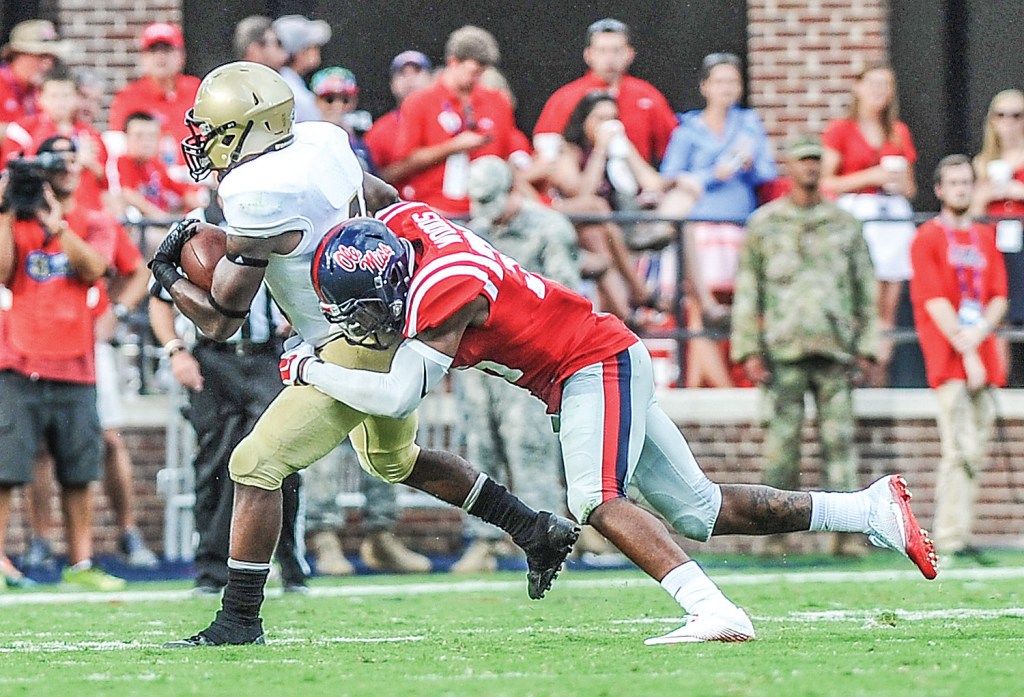 First-year starter Zedrick Woods is part of the makeover in Ole Miss’ secondary, which will try to shore things up against Alabama after allowing 419 passing yards to Florida State in the season opener. (Bruce Newman)

After a virtual week off, Ole Miss’ secondary is getting thrown back into the fire.

Ole Miss’ first taste of life without Trae Elston and Mike Hilton on the back end of the defense was a sour one against Florida State with the Rebels allowing 419 yards passing in the 45-34 loss. The fresh faces in the defensive backfield rarely saw a pass last week against Wofford’s option offense, making a gauge of whether the 19th-ranked Rebels’ coverage had gotten any better or worse impossible.

“Off of just last week is not a test for that part of our defense because of the offense we faced,” Ole Miss coach Hugh Freeze said.

The group’s next test comes Saturday at Vaught-Hemingway Stadium against No. 1 Alabama (2:30 p.m., CBS). Sophomore Zedrick Woods and true freshman Myles Hartsfield have taken over at the safety spots while redshirt freshman Jalen Julius got the start over Tony Bridges against Wofford at corner opposite senior Carlos Davis, who has become a full-time starter with Ken Webster lost for the season.

Nickel corner Tony Conner is the only one among the group with extended starting experience, though the senior is still working his way back from last season’s knee injury. Teams are completing 62.3 percent of their passes against the Rebels (1-1), the second-highest percentage allowed among Southeastern Conference teams.

“They’re going to be tested this week,” Freeze said.

Alabama (2-0) has taken its shots down the field with freshman quarterback Jalen Hurts, who’s taken advantage of teams’ aggressiveness against the Crimson Tide’s running game. Hurts is averaging nearly 14 yards a completion with two of his four touchdown passes covering 71 and 39 yards.

With speedsters ArDarius Stewart and Calvin Ridley out wide and 6-foot-6 tight end O.J. Howard working underneath, there are plenty of playmakers for Ole Miss to keep track of.

“As I’ve been watching them, they’ve got a lot of speed guys,” Conner said. “Their offense is a lot like our offense. We know what they can do. Take nothing from Alabama, but we’ve just got to go out and play right.”

Some of the growing pains showed up against Florida State with some blown assignments and miscommunication on the back end. The Seminoles also took advantage of a lot of loose coverage by picking up chunks of yardage underneath, something defensive coordinator Dave Wommack said needs to be addressed with more physicality with the playbook already being scaled back considerably for the youngsters in the secondary.

“You’ve got to be a competitor. You’ve got to challenge them,” Wommack said. “I’m not saying our guys aren’t competitors, but they have to go through that experience and know to get up there and compete. You can do it. You’re here on scholarship.”

Ole Miss will soon find out if any progress has been made.

“From now on, I think that we’re going to start challenging receivers and pressing more,” Davis said. “We played off (against Florida State) because we had help underneath, but everything just wasn’t working out. The communication and everything just had to get better.”