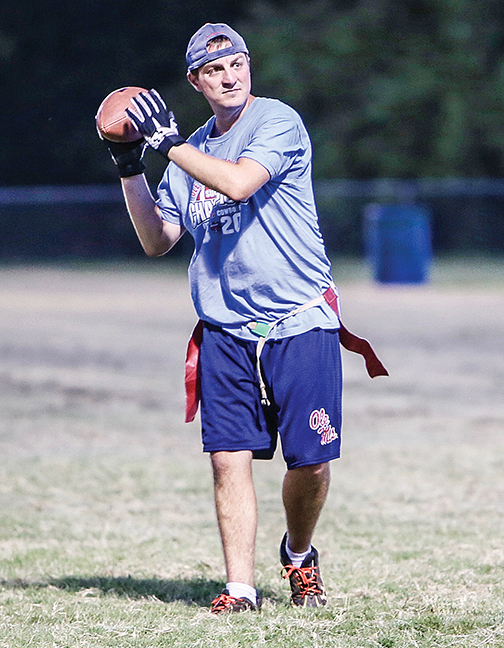 Ben Rogers throws a football during practice for the Unified Rebels.

This Friday, for the first time ever, Special Olympics Collegiate team the Unified Rebels will face the Unified Tide at the Blackburn-McMurray Outdoor Sports Complex for a game of flag football. The game begins at 6:30 p.m. and is free to attend, making it an ideal outing for impatient football fans ready for the Saturday game between the Ole Miss Rebels and the Alabama Crimson Tide.

Veverka said he has been involved with Special Olympics in a variety of ways, but this year is his first time coaching a Unified flag football team.

“I helped coach a Unified basketball team that went to the state tournament in Jackson in (the) spring,” he said. “I’m happy to be coaching such a great group of athletes and partners who are willing to work hard and have fun.”

He explained that SO College Ole Miss functions as an official club on campus that connects college students and individuals with intellectual disabilities through sports to build friendships and help lead social justice movement of Special Olympics.

Unified Sports is a branch program of Special Olympics that promotes social inclusion through training and competing together in various sports from flag football to basketball to baseball to name a few sports included.

“Even though Unified Sports clearly focuses on the sport aspect of Special Olympics College, the goals of the club are much broader,” Veverka said. “It’s a great organization to get involved with and support. Once people have a chance to meet the athletes or see a practice or a game, they will be more willing to be involved because it’s such a fun, friendly atmosphere for a great cause.”

The athletes are excited for their first game against Unified Tide.

Another Unified Rebel athlete, Bill Holdin, added: “I really enjoy it because … this is one of my favorite sports. If anyone out there on TV is watching, just make sure you’re looking for me ‘cause I’ll show you how it’s done.”

Veverka said practices are a blast.

They said Ben has been involved in Special Olympics for about eight years.

“He loves football and has been a manager for Madison Central for three years but had never had an opportunity to play,” Paul said. “He also loves Ole Miss and when the opportunity came up, they invited him to play. We are really looking forward to the game this year against Alabama.

“This is the first time the Mississippi team has played an out-of-state team, and it is very exciting to be a part of that.  On top of that, Alabama is such a traditional rival of Ole Miss. We will have a chance to beat them twice this year.”

Ben said he wanted to defeat the Unified Tide in his mother’s honor since she’s a University of Mississippi alumna and because he also hopes the Ole Miss Rebels will defeat the Alabama Crimson Tide.

Ben has played twice before, his first game being the Unified Egg Bowl between the Unified Rebels and the Unified Bulldogs held in Starkville in 2014.

He also played in the Unified Soul Bowl in 2015 between Alcorn State and Jackson State University on JSU’s campus.

“This is the third year we’ve done the Unified Rivalry games, and the first year that a team from Special Olympics College Ole Miss has faced the Unified Tide from Alabama,” said Jim Beaugez, public relations director for Special Olympics Mississippi. “On Nov. 14 in Starkville, we will host the Unified Egg Bowl.”

Beaugez explained the idea for Unified Egg Bowl was to bring together the state for the Special Olympics’ mission on its most divided occasion: the annual Egg Bowl football game between the Ole Miss Rebels and the Mississippi State Bulldogs.

These two rivalry games can help fulfill the Special Olympics’ mission in Unified Sports, which is bringing together people with and without intellectual disabilities to create lifelong friendships through training and playing together.

The president of Special Olympics College Ole Miss, Mary Evelyn Webb, testifies to the mission, saying that she has met some of her best friends in this organization.

Webb worked with Special Olympics in soccer and basketball while a student at Ridgeland High School.

When she enrolled at University of Mississippi, she became involved with the Unified Egg Bowl rivalry series as well as the Unified Flag Football League.

“We loved it so much we brought Special Olympics College here to Ole Miss,” she said. “I don’t ever regret bringing it here. I’ve met great people and some of my best friends. It’s great to come out even though we don’t see each other for six months at a time.

“It’s like we never left. It’s a special bond which is the purpose of Special Olympics College; it bridges the gap.”

Webb is excited to play Unified Tide for the first time, and she said, “There’s a lot of hype and we want a lot of people out and a lot of fans in the stands. It’s going to be great!”

SO College Ole Miss will be selling game-day buttons for $3 a piece at the Student Union on campus this week from Monday to Friday.

Veverka said he “cannot wait for this game” against Unified Tide.

“We have been practicing for the last few weeks to make sure we are as prepared as possible against a tough Alabama team,” Veverka said. “Just like our Ole Miss Rebels, I think we are going to win a close game and defend our home field.

“Regardless of a win or loss, this event will be spectacular and will shed a positive light on Special Olympics and Unified Sports for the entire nation to see.”

The organization is looking for partners and coaches to join and lead the teams.

For more information, SO College Ole Miss president, Mary Evelyn Webb, may be contacted at mewebb1@go.olemiss.edu.

Fifth Circuit Court of Appeals pays a visit to…