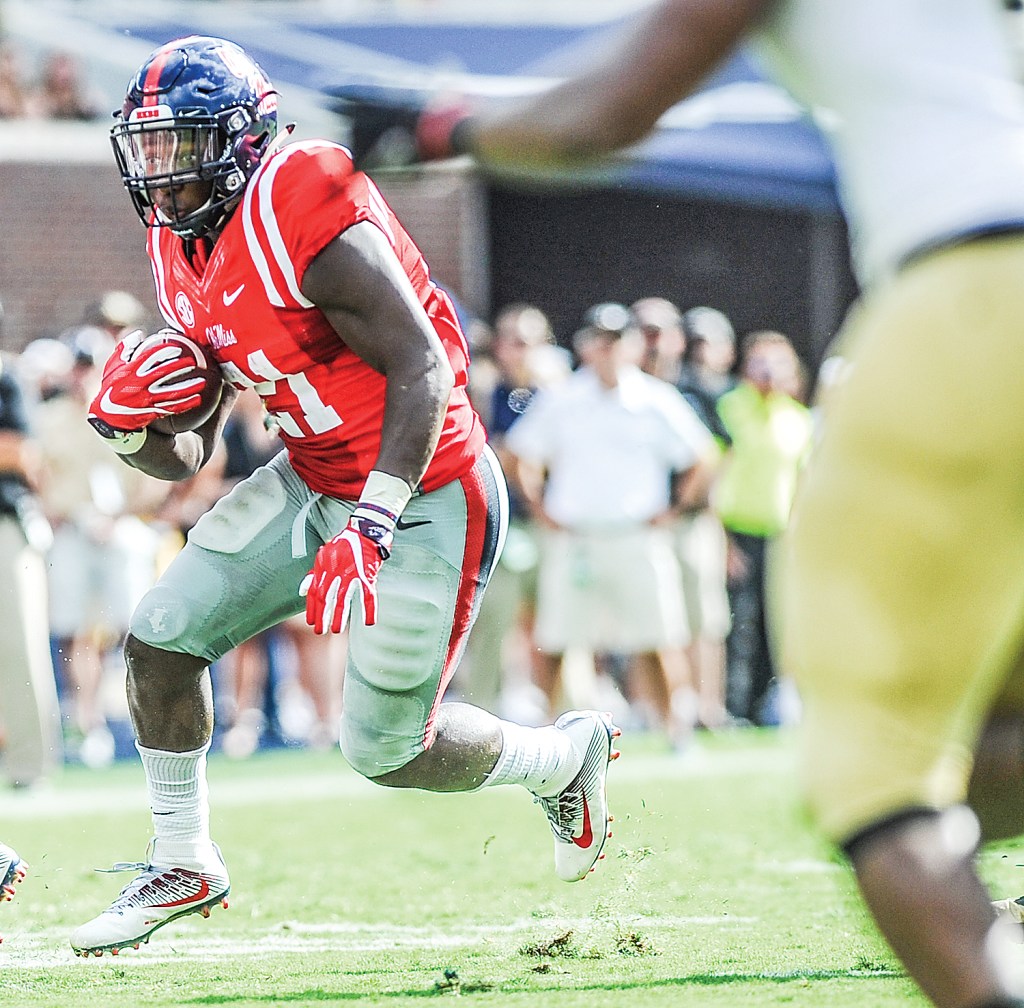 Ole Miss running back Akeem Judd (21) will likely get most of the carries Saturday against Alabama, but the Rebels are trying to figure out different ways to get what they can from their running game against what is annually one of the nation’s top run defenses. (Bruce Newman)

There’s also a reality that comes with going up against the immovable object that is annually Nick Saban’s defense.

“If you think we’re going to line up and rush for 300 yards against this team, that doesn’t happen,” Ole Miss’ coach said of Alabama’s defense.

Yet No. 19 Ole Miss will try to keep some semblance of balance when the Rebels host top-ranked Alabama on Saturday (2:30 p.m., CBS). Another wave of future NFL talent up front has the Crimson Tide in their usual spot among the national leaders in rush defense (43.5 yards per game), and even more speed and athleticism than usual has Freeze believing this Alabama defense may be the most complete Saban’s had during his 10 years in Tuscaloosa.

It’s not just the run the Tide is halting. An improved pass rush has netted Alabama seven sacks through two games with junior end Jonathan Allen leading the way with three, putting the onus on the running game to take some of the pressure off Chad Kelly and his receivers.

“This is a team where you can’t just be one-dimensional,” running back Akeem Judd said. “You’ve got to open it up, and I think we’re going to do some great things on the ground as well as in the air.”

The Rebels ran for 174 yards last week against Wofford but mustered fewer than 3 yards a carry against a Florida State team that’s far more similar to what the Rebels will see up front from Alabama. Coaches admitted the Rebels abandoned the run too early against the Seminoles, but Ole Miss plans to take what’s there Saturday — or at least try to.

“If they’re going to give us the run, we’re going to hand it off,” offensive coordinator Dan Werner said. “If not, we’re going to throw it. That’s how our offense works. These guys do not like to let you run the football against them and not many people have done it.”

Judd has rushed for just 108 yards through the first two games, but it’s easily the most among Ole Miss’ backs with Jordan Wilkins and Eric Swinney out for the season. With experience lacking behind the senior — little-used Eugene Brazley is Judd’s backup — Ole Miss may have to get creative in its efforts to move the ball on the ground.

Not so secret weapon?

One option is Kelly, who ran for 500 yards and had a team-best 10 rushing touchdowns last year but doesn’t have a carry this season. That dimension to the quarterback’s game evolved later in the season on designed runs and improvisation, something he may have to do at times Saturday.

Said Werner, “It’s going to be tough (to run), but we’ll try as hard as we can to concoct a few ways and see what happens.”

Explosive plays are almost a requirement against Alabama with teams rarely able to drive the length of the field, something the Rebels have produced in their wins over the Tide the last two years with scoring plays of 73, 66, 34 and 24 yards all coming through the air. The Rebels also had a combined plus-6 turnover margin in those games.

Ole Miss just needs its running game to be serviceable.

“We need to do it enough to really stay balanced, and I think we can,” Freeze said.