Ole Miss vs. Alabama: Rebels need to figure out finishing to get win 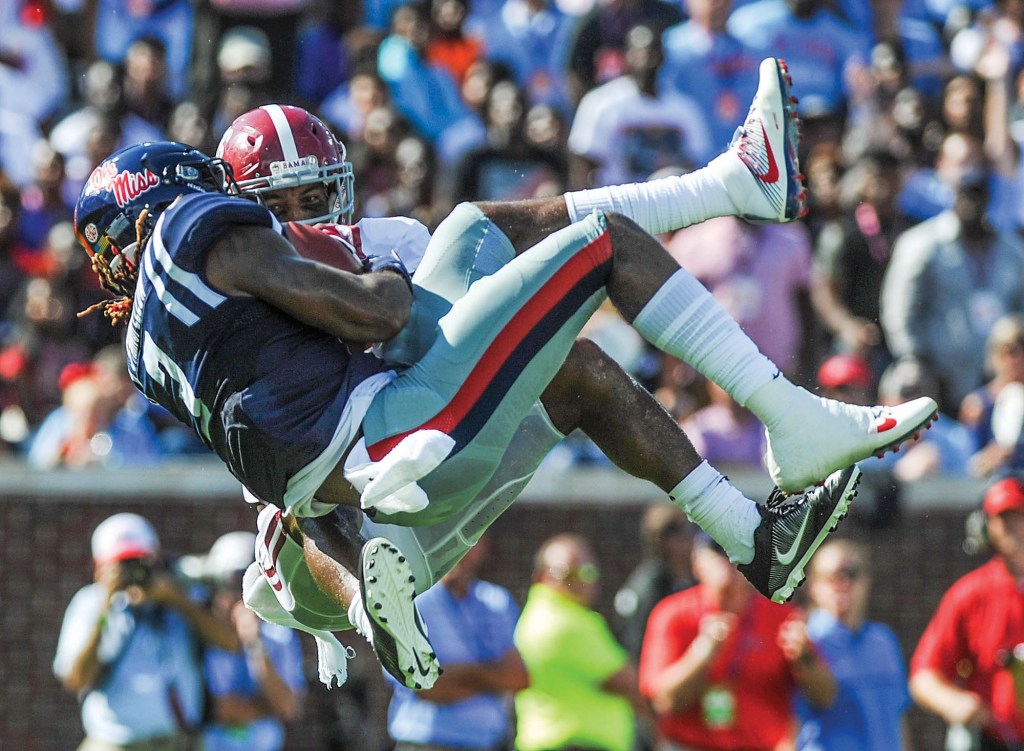 If you were watching Ole Miss’ meltdown against Alabama and feeling a sense of déjà vu, well, it was impossible not to.

The Rebels jumped all over Alabama in the teams’ Southeastern Conference showdown Saturday at Vaught-Hemingway Stadium. With a 24-3 lead after a frenzied sequence where Marquis Haynes flattened Alabama quarterback Jalen Hurts to knock the ball loose with everyone on Ole Miss’ sideline trying to keep up with John Youngblood as he rumbled 44 yards for a score, Ole Miss looked primed to not only hand Alabama its third straight loss to the same team for the first time under Nick Saban but more importantly take its spot in the driver’s seat in the rugged Southeastern Conference’s Western Division.

Then it felt like Labor Day night all over again when Ole Miss’ 22-point lead against Florida State was gone before fans got back in their seats following a halftime trip to the concession stand. Alabama erased its deficit in a little more than 5 minutes of game time.

Where the Seminoles simply picked Ole Miss apart in the secondary, the Crimson Tide got a lot of help from the Rebels. A boneheaded personal foul on Breeland Speaks during Youngblood’s return was already going to cost Ole Miss 15 yards on the ensuing kickoff before Nathan Noble booted the ball out of bounds, seemingly bringing a shocked Alabama team back to an alert state.

Alabama was in the end zone three plays later, got another touchdown soon after on a punt down the middle of the field to one of the nation’s best returners in Eddie Jackson, and once Alabama’s loaded defensive front made its presence felt early in the third quarter on Ryan Anderson’s strip sack of Chad Kelly that resulted in six immediate points for the Tide, the Rebels’ lead — and all of their momentum — was gone.

You have to give Florida State and Alabama some credit as Hugh Freeze did afterward. No lead is really safe against the Crimson Tide while Florida State is also a good team, though the Seminoles’ dismantling by Louisville on Saturday doesn’t look so good now for the Rebels.

But Ole Miss has some talent of its own, enough where the swings on the scoreboard shouldn’t happen that fast when a little adversity hits. Alabama scored 24 unanswered points to tie the largest single-game comeback in school history and put up 21 of the game’s next 24 after Ole Miss briefly tied it at 27. Florida State scored 33 unanswered to take control of that game.

With three freshmen and sophomores starting in Ole Miss’ secondary, teams will continue to take advantage of that youth as the group learns on the fly. The defense’s strength lies up front, but now that group is struggling with depleted depth, playing without Victor Evans (concussion) and Fadol Brown (foot) on Saturday. Alabama took advantage of that, too, piling up 334 rushing yards.

“We’re playing a lot of young kids in a lot of areas, and I thought they competed,” Freeze said. “I’m excited about getting back out on the field with those guys.”

It’s more than physical ability when you go from one end of the spectrum to the other as swiftly as Ole Miss has done against the two teams that are similar to the kind of talent the Rebels will see lining up across from them more weeks than not starting next week when No. 16 Georgia comes to town.

Is there a glitch in the psyche of a team that’s breaking in so many new contributors on both sides of the ball?

“I didn’t see anyone losing composure,” Freeze said. “It’s more discipline, your eyes being where they’re supposed to be, fitting in the right gap and doing it with a sense of urgency on the defensive side. Offensively we’ve got to take care of the ball. We scored enough points to beat an Alabama team.”

Whatever it is, Ole Miss has to figure it out quickly. Two chances at marquee wins have eluded the Rebels in part because they haven’t finished, and in this conference, more could fall by the wayside if the trend isn’t reversed.

Ole Miss’ season may depend on it.