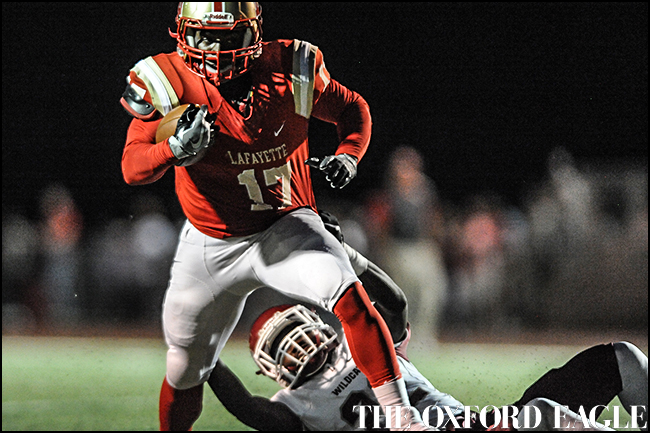 The Lafayette Commodores were coming off their first victory of the season and had momentum on their side at the start of their matchup against the Louisville Wildcats. On their first drive, quarterback Will Ard found Tyler Carmichael-Williams for a 49-yard touchdown and the early lead, setting the tone for a 42-7 rout Friday at William L. Buford Stadium.

The Commodores’ defense held Louisville to a quick three and out, giving Ard and the Commodore offense the ball again. On a rollout pass deep in opponent territory, Ard found Ross Ingram, who powered his way into the end zone to give Lafayette (2-2) a two-score lead and Ard his second passing touchdown on the day.

Louisville (1-4) responded on its next possession with a touchdown, cutting the Lafayette lead to just seven going into the half.  Lafayette coach Michael Fair was not impressed with his team’s first-half performance but still thought the Commodores played a good game overall.

“In the first half, we came out a little flat. It’s like we saw it coming,” Fair said. “Our guys picked it up when they needed to later in the game and played really well.”

The Commodores played the second half like a completely rejuvenated team and piled on to their lead early. The successful passing attack freed up space for running back Jamarcus Quarles, allowing him to break free for a 46-yard touchdown run to put Lafayette up 21-7 midway through the third quarter.

The next Commodore possession on the first play, Quarles’ number was called again and he delivered, this time with a 60-yard touchdown run. Fair believed Quarles’ success was a result of the success through the air.

“We got them loosened up with our passing game,” Fair said. “We were able to find a couple cracks, and Jamarcus was able to hit them and have a really good game.”

The Lafayette defense shut down the Louisville offense and intercepted an overthrown pass and returned it to the Wildcat 4-yard line. Brandon Turnage made the interception and set up the Commodores for their fifth touchdown, an 11-yard pass from Ard to Carmichael-Williams.

In the fourth quarter, sophomore running back Jamie Shaw demonstrated powerful running, carrying the Commodore offense downfield near the end of the game and eventually scoring on a 7-yard run, putting Lafayette up 42-7 and cementing the victory over Louisville.

Fair’s defense held Louisville to only one score, and he commented on his defense’s second-half improvements. The Commodores have allowed three touchdowns in their last three games combined.

“They came out flying in the second half and kept everything in front of them,” Fair said. “They played really well, and I’m proud of their energy.”

The Commodores are on a two-game winning streak and will look to make it three straight when they travel to Charleston next Friday.