Alabama running game too much for Ole Miss in win 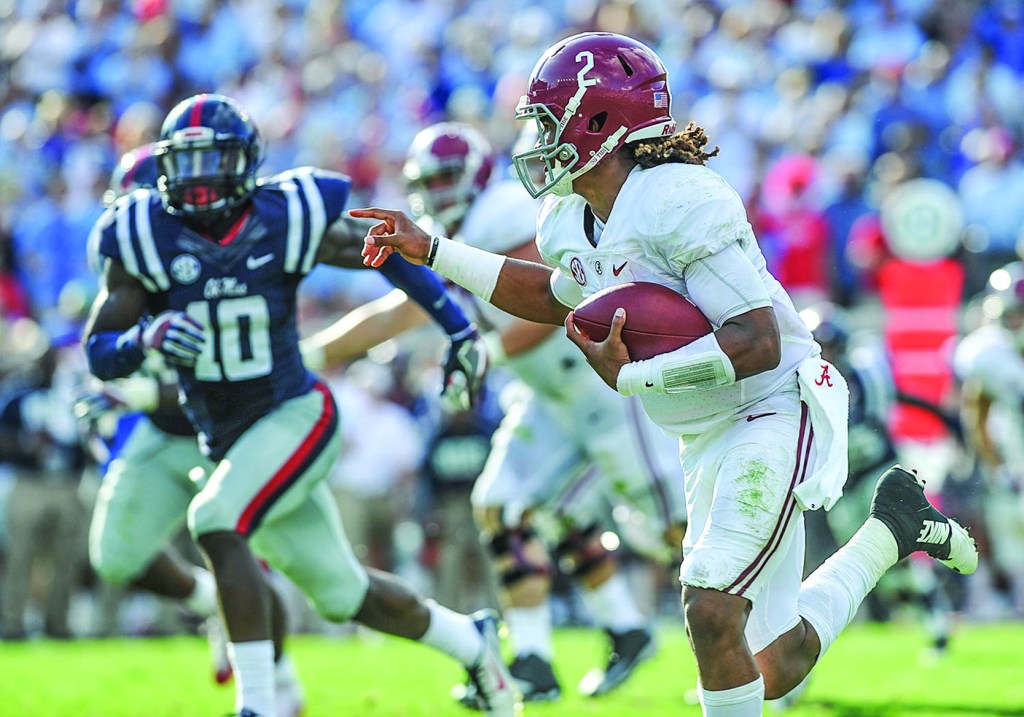 Alabama quarterback Jalen Hurts (2) runs for a first down against Ole Miss at Vaught-Hemingway Stadium on Saturday. Sept. 17, 2016. (Bruce Newman)

This version of Alabama did not have the monster running back they normally feature. No Mark Ingram. No Derrick Henry. That did not stop the Crimson Tide from having their way against the Ole Miss run defense.

The No. 1 team in the nation rushed for 334 yards on 48 carries and scored three rushing touchdowns. The majority of those yards came in the second half as Ole Miss held the Crimson Tide to 116 yards after the first two quarters.

“I thought we did a good job on them the first half,” defensive coordinator Dave Wommack said. “I think we wear down a litte bit with some depth issues. We’ve got to do a better job of playing smarter and fitting things better than what we do. This team is young in some areas.”

Quarterback Jalen Hurts ran for 146 yards on 18 carries. It was the first quarterback to rush for 100 yards under Nick Saban at the collegiate or pro level. Running back Damien Harris carried it 16 times for 144 yards and one score. The other two touchdowns came from Bo Scarbrough and Calvin Ridley.

“We obviously (defended the run) as well as we could. They’re really talented,” defensive end John Youngblood said. “(Williams) does not look like a normal running back. So he ran hard.”

Career play
There was one positive for Youngblood to take away from Saturday’s game and that was his first career touchdown. Alabama quarterback Jalen Hurts fumbled the ball after a Marquis Haynes hit, and the senior picked it up for a 44-yard scoop-and-score. It gave Ole Miss a 24-3 lead at the time.

“There was only one thing on my mind and that was my father,” Youngblood said. “I thought of him and thought of my family being there at the game and them being able to witness it.”

Injury update
In what turned out to be key losses, Ole Miss was without two pieces of their defense.

Defensive ends Fadol Brown and Victor Evans did not play on Saturday. Brown was seen during pregame warmups  in gym shorts, his jersey and a walking boot. Head coach Hugh Freeze said after the game that Brown did not practice any during the week leading up.

Evans, Haynes’ primary backup, suffered a hit to the head against Wofford and had to go through the concussion protocol. Freeze said last Monday that Evans had passed all his tests up that point and continued that statement throughout the week.

“We really missed them,” Freeze said. “It would have really helped to have had one of those guys, but we didn’t.”

Running back Eugene Brazley took a shot to the head in the third quarter and missed the remainder of the second half.

Extra Points
The last three games between Ole Miss and Alabama have been decided by six points or less. …A new school and state attendance record for a college football game was set Saturday as 66,176 people squeezed into the new Vaught-Hemingway Stadium. … Chad Kelly completed a touchdown pass in his 16th consecutive game, tying Eli Manning’s school record.