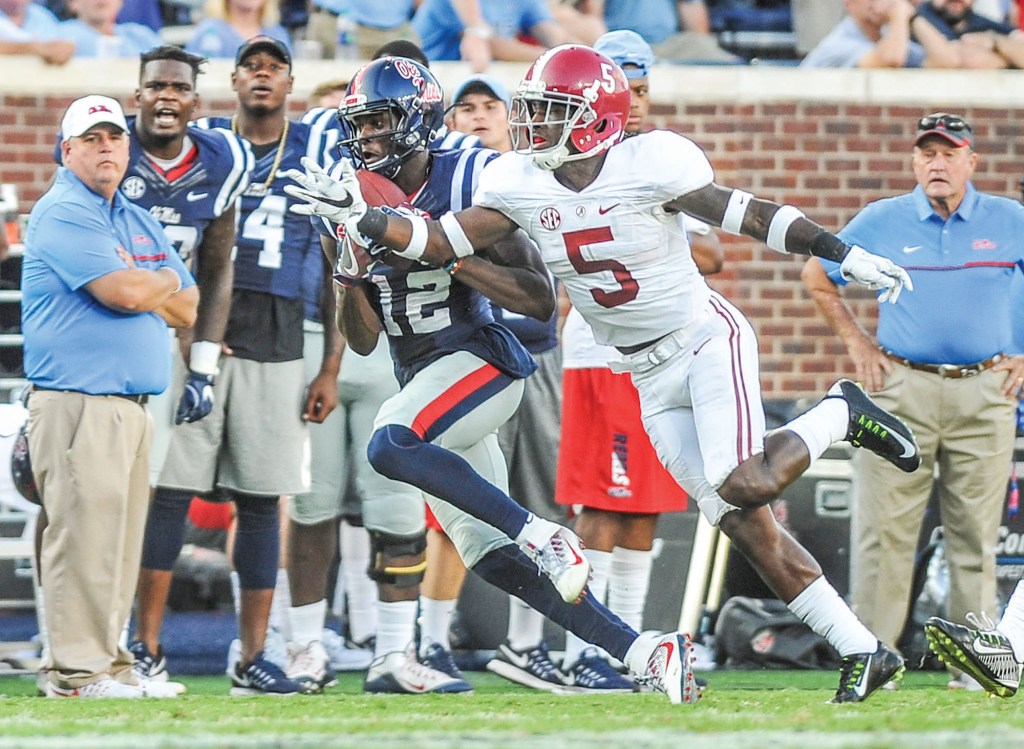 For the second time this season, Ole Miss had a substantial lead in the first half.

Yet again, it wasn’t enough.

The 19th-ranked Rebels watched their 21-point lead dissipate in a little more than 5 minutes of game time, and a chance for a third straight win over Alabama eluded them in a 48-43 loss to the top-ranked Crimson Tide on Saturday in front of a record crowd of 66,176 at Vaught-Hemingway Stadium in the teams’ Southeastern Conference opener.

Ole Miss (1-2, 0-1 SEC) led 24-3 late in the first half before Alabama scored 24 unanswered points and led by as many as 18 in the second half — less than two weeks after the Rebels held a 22-point advantage in their opening loss to Florida State on Labor Day.

“For us to get up like that twice and watch it wash away, we’ve got to look ourselves in the mirror,” tight end Evan Engram said.

Chad Kelly went 26 of 41 passing for a career-high 421 yards with three touchdowns and an interception that was returned 75 yards for a score by Jonathan Allen in the fourth quarter, but the senior helped Ole Miss stay close. A 5-yard touchdown pass to Damore’ea Stringfellow followed by an onside kick and a 37-yard scoring toss to A.J. Brown cut Alabama’s lead to five with 2:51 left, but the Rebels didn’t get the ball back.

Alabama freshman quarterback Jalen Hurts completed 19 of his 31 attempts for 158 yards but did most of his damage on the ground, rushing 18 times for 146 yards. Damien Harris added 144 yards on 16 carries for the Crimson Tide (3-0, 1-0), who racked up 334 rushing yards.

“They did a good job mixing it up,” said linebacker Terry Caldwell, who had a team-high 10 tackles. “Our alignment and our assignments, we just need to go back to the film, make sure we correct our mistakes and make sure they don’t happen again.”

Much like it did the last two seasons, Ole Miss used big plays to quickly build a lead.

Akeem Judd capped the game’s first possession with a 23-yard touchdown run while Kelly took advantage of a busted coverage to find a wide-open Engram for a 66-yard score in the second quarter. The defense got in on the act when Marquis Haynes came off the edge on Alabama’s ensuing possession to jar the ball loose from Hurts with John Youngblood scooping it up and rumbling 44 yards to extend the Rebels’ lead to 24-3 with 2:47 left before halftime.

But miscues helped the Rebels lose that momentum nearly as fast. Breeland Speaks was flagged for a personal foul before the ensuing kickoff went out of bounds to give Alabama possession at midfield. Calvin Ridley was in the end zone three plays later on a 6-yard run, and Eddie Jackson returned Ole Miss’ ensuing punt 85 yards for a score to cut the Rebels’ lead to 24-17 at the half.

“We as coaches have got to do a better job of helping our young men understand the value of every single play over the course of a game has the same weight and will measure that in the outcome when you’re playing the top team in the country,” Ole Miss coach Hugh Freeze said.

Daron Payne’s fumble recovery for a touchdown early in the third quarter erased Ole Miss’ lead completely. A field goal gave Alabama its first lead at 27-24, and it appeared Ole Miss answered on Kelly’s 32-yard pass to Stringfellow that was originally ruled a touchdown only for the call to be reversed after review.

The Rebels went backward on three straight plays from inside the 1-yard line, not going under center on any of them. Ole Miss settled for Gary Wunderlich’s 18-yard field goal before Alabama scored 21 of the game’s next 24 points to take control.

“The margin of error in winning and losing in this league is so small,” Freeze said. “We’ve got to do a lot of things better.”