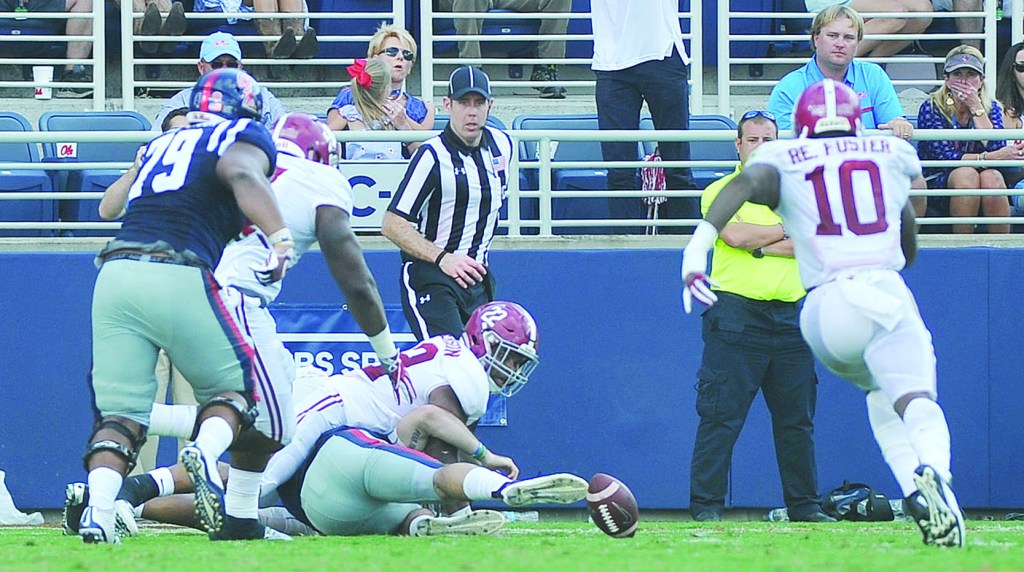 For the second time in three weeks, Ole Miss looked like it was a top- 5 team if not the best in the country for the first half. Unfortunately for Ole Miss, football is a two-half sport.

The Rebels had No. 1 Alabama on the ropes, trying to wipe the cobwebs from their eyes after falling behind 24-3. Then the next five minutes of game clock saw what Ole Miss had already witnessed two weeks ago in Orlando, a 20-plus point lead evaporate.

The 22-point lead to Florida State disappeared due to the Seminole defense becoming dominant and the offense getting going under freshman Deandre Francois. The way Alabama came back was more due to mental miscues and special teams blunders by Ole Miss.

When Marquis Haynes sacked Alabama quarterback Jalen Hurts, it caused a fumble which defensive end John Youngblood returned 44 yards for his first career touchdown to put Ole Miss up 24-3 with 2:43 left in the half. What happened behind the play is what started the momentum shift.

Defensive end Breeland Speaks was flagged for a personal foul, which was marked off on the kickoff. Kicker Nathan Noble then proceeded to kick the ball out of bounds. The combination of the two events gave Alabama the ball at midfield.  Receiver Calvin Ridley scored on the drive with a 6-yard run to make it 24-10, taking only 30 seconds off the clock. During the next Ole Miss possession, Eddie Jackson returned a punt 85 yards for a touchdown.

Fourteen points in a little over a minute, cutting the Ole Miss lead down to 24-17 at halftime.

“It resulted in a lot of points for them,” Ole Miss coach Hugh Freeze said.

It continued to get worse for Ole Miss at the start of the second half as quarterback Chad Kelly was sacked at the Rebels’ 1-yard line and Da’Ron Payne picked up the ball and scored, tying the game and erasing the massive lead Ole Miss had secured itself in just 5 minutes, 24 seconds of game clock.

The trend of going up big and then blowing a lead of more than 21 points in two of the first three games is something that has not been done by a Power Five conference team in over 10 years before Ole Miss did it this season.

“It hurts,” tight end Evan Engram said. “Knowing we have the talent and we have the guys to compete with the best teams in the country. For us to get up like that twice and to watch it wash away, we’ve got to look ourselves in the mirror.”