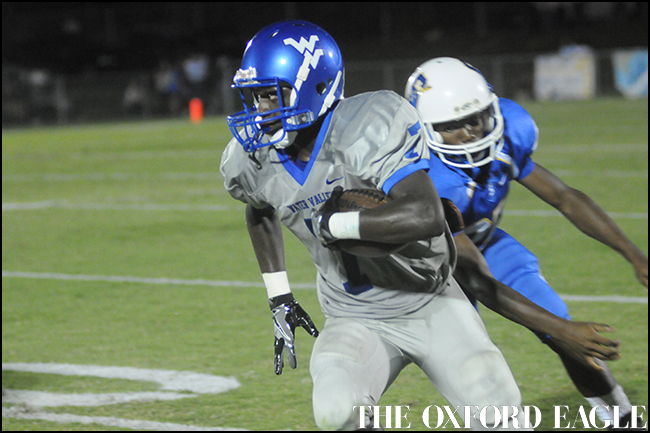 SENATOBIA — The scoreboard is no longer a concern for Water Valley coach Brad Embry. His focus is on his team getting better every week on the field.

It is a good thing because the scoreboard was not very kind to the Blue Devils once again as Senatobia handed them their third straight loss in a 63-10 rout on Friday. It was the fourth road game in the first five weeks for Water Valley (1-4) and its third loss away from home.

After suffering a loss to Pontotoc last week when the game got out of hand, Water Valley looked to be making things a little more competitive against the Warriors on Friday. After a Senatobia touchdown and a field goal by Edgar Guzman, the score was 7-3 after the opening quarter.

Senatobia (4-1), ranked No. 4 in Class 4A, added a second touchdown for a 14-3 lead midway through the second quarter. That is when things began to spiral downward for the Blue Devils. The Warriors scored 28 unanswered points in the final six minutes of the first half for a commanding 35-3 lead at halftime. Two Water Valley fumbles and an 80-yard punt return for a touchdown fueled the run.

“I think we competed better. We just had a bunch of turnovers,” Embry said. “(Senatobia) made some plays. … It wasn’t just us. It was them creating turnovers.”

The Blue Devils’ offense showed signs of life in the early going. Their second possession went 74 yards on 12 plays, reaching the Senatobia 1-yard line before the Warrior defense forced the 27-yard field goal by Guzman.

It was the closest to the end zone Water Valley would get until quarterback Ty Varner hit wideout Martavius Rockett for 30 yards and a touchdown on the Blue Devils’ first drive of the second half.

“We did have three points, but I’ll tell you we were fortunate the way (Senatobia) was playing defense,” Embry said of the first half. “That’s the kind of stuff we don’t have an answer for. We haven’t had an answer for it all year. Short-yardage stuff. We’ve got some things we’ve been working on, but we’ve got to continue to work.”

The offense never really got going consistently for Water Valley all night as the run game was bogged down.  The Blue Devils ran for 60 yards on 19 carries. Taghee James had a team-high 34 yards on 10 carries while Javarius Benson ran seven times for 31 yards.

Varner finished the night 13 of 23 for 183 yards and a touchdown. He also was responsible for six of the Blue Devils’ seven turnovers with three interceptions and three fumbles. The seventh was a fumble on a kickoff return that Senatobia recovered in the second quarter.

“A lot of that is us and a lot of it’s (Senatobia) making plays,” Embry said of Varner’s performance. “It’s hard to simulate the speed that they have. The things that work in practice sometimes, it just doesn’t work the same in a game. We’ll learn from it.”

Water Valley will return home for a two-game homestead next week beginning with homecoming against Winona.