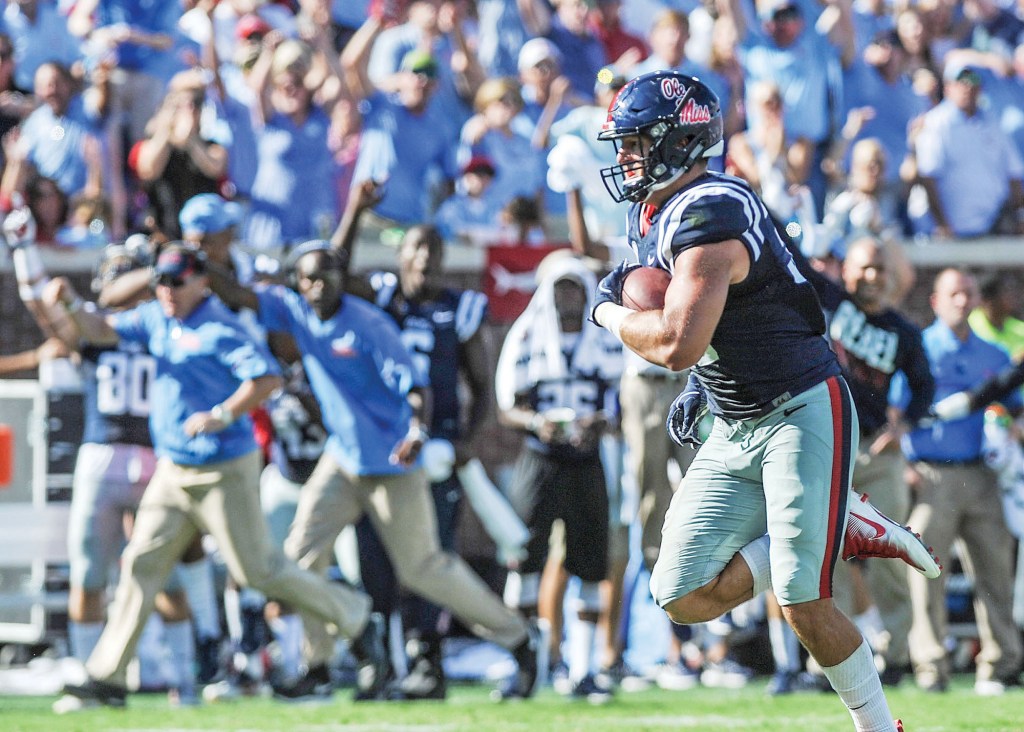 Ole Miss defensive end John Youngblood (38) returns a fumble for a touchdown against Alabama at Vaught-Hemingway Stadium on Saturday. The Rebels dropped to No. 23 in this week's Associated Press poll following their 48-43 loss. (Bruce Newman)

The Rebels fell four spots in the poll released Sunday following their 48-43 loss to No. 1 Alabama — a game Ole Miss led 24-3 with 2 minutes, 47 seconds left in the second quarter. Ole Miss (1-2, 0-1 Southeastern Conference), whose other loss came to No. 13 Florida State, joins No. 25 Oklahoma as the only ranked teams with a losing record.

Ole Miss also dropped four spots to No. 21 in the Amway Coaches Poll.

Next up for Ole Miss is a home date with No. 12 Georgia (3-0, 1-0), the Rebels’ third top-15 opponent in the season’s first month after the Bulldogs moved up four spots after escaping Missouri with a 28-27 win Saturday. Kickoff from Vaught-Hemingway Stadium this Saturday is set for 11 a.m. (ESPN).

No. 3 Louisville moved up seven spots following its 63-20 pasting of the Seminoles as did No. 10 Texas A&M, which stayed unbeaten with a 29-16 road win over Auburn. No. 15 Miami was the biggest riser, vaulting 10 spots following a 45-10 win over Appalachian State that moved the Hurricanes to 3-0.

Florida State fell 11 spots, making for the largest drop by a No. 2 team since 2012 when Southern Cal plummeted to No. 13 after a loss to Stanford. No. 21 Texas fell 10 spots following its 50-43 loss at California.