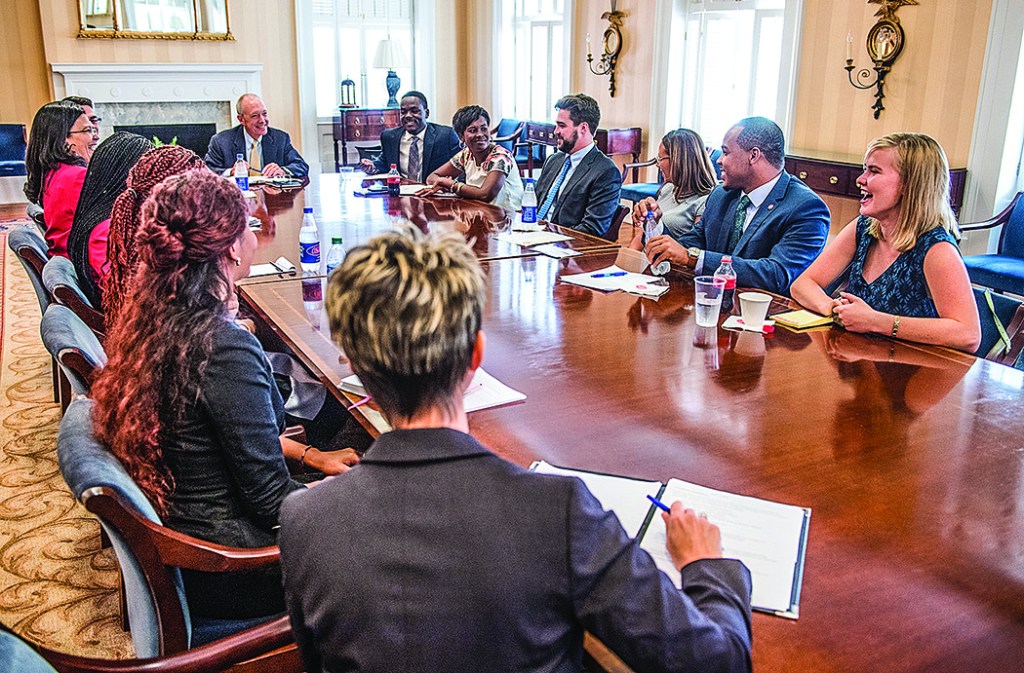 UM students meet with U.S. Department of Education officials to talk about how the university is creating a culture of inclusiveness. Photo by Robert Jordan/Ole Miss Communications

“Impressed and moved” is how Undersecretary of Education Ted Mitchell described his reaction to a visit last week to the University of Mississippi.

Mitchell, a part of the U.S. Department of Education’s seventh annual back-to-school bus tour across the country, spent the morning learning about UM efforts to increase inclusion and identify the challenges universities face in creating opportunities for all students. He made his comment after talking with student leaders on the Ole Miss campus.

He met with Ole Miss administrators before joining the students for a panel discussion, which was moderated by Brandi Hephner LaBanc, UM vice chancellor for student affairs.

“It was a great honor and opportunity for Ole Miss to host the Department of Education and showcase how our administration and students embrace the tenets of the UM Creed in our diversity and inclusion efforts,” Chancellor Jeffrey Vitter said.

Following the group of students sharing their stories about the work they do on campus, Mitchell said he plans to take lessons from Ole Miss with him to pass on to other universities and also to education leaders in Washington. One particular aspect of the university’s approach stood out to him.

“One of the reasons we are here is we think Ole Miss is a place where really tough issues of race, class and gender and all kinds of identity formation are not ignored, but embraced as part of what one needs to learn as part of the college experience,” Mitchell said.

The university made news in 1962 after a deadly riot ensued following the enrollment of James Meredith, its first black student. The university’s past and its efforts to deal with issues head-on makes it an example others can follow, he said.

The group heard from Mississippi students from different backgrounds. They talked about working to recruit and mentor minority students, facilitate open dialogue on sensitive topics and promote understanding and tolerance.

Dylan Lewis, a senior journalism major from Tupelo, shared how he’s worked to remind LGBTQ students and other minority groups that they can be heard and play important roles on campus.

Clay Wooley, a senior mechanical engineering and general studies major from Jackson, talked about how his fraternity has moved forward with educational initiatives after an incident where offensive remarks were directed toward female participants.

Eloise Tyner, a senior public policy major from Oxford, discussed how the university approaches controversies on campus to ensure that no student on any side of a decision are marginalized.

Aurielle “Sunny” Fowler, a sophomore psychology major from Clinton, talked about her efforts to mentor and recruit students through the university’s Mississippi Outreach to Scholastic Talent program for prospective African-American students.

Clarksdale native Espy, who serves on the Obama administration’s HBCU panel, received her bachelor’s degree from Howard University and a master’s degree from Ole Miss.

She came away impressed with the university’s climate of continuing dialogue on difficult issues.

“Ole Miss has a very storied history and past, and to share it in an honest way that the faculty, the administration and students have takes courage and a willingness to just be who you are,” Espy said. “That’s amazing to have that willingness to come from your past and create your future.”