Mississippi flag supporters are hurting their own cause 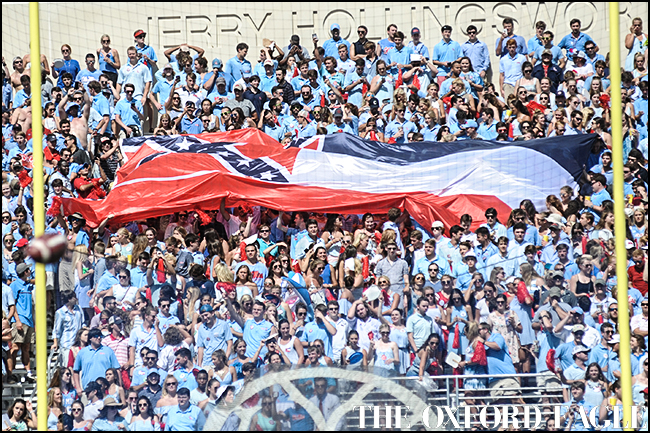 A Mississippi state flag is unfurled in the student section shortly before the kickoff of the Ole Miss vs. Alabama game at Vaught-Hemingway Stadium in Oxford, Miss. on Saturday, September 17, 2016. The SEC and NCAA issued statements following Sunday's vote to remove the flag as the official state flag. (Bruce Newman/Oxford Eagle)

The group in the student section that unfurled the giant Mississippi state flag before Saturday’s Ole Miss game only hurt their cause of supporting the flag.

Whenever Mississippi’s flag is flaunted like that in a defiant display of patriotism, it is revealed as a dated, time-trapped symbol that needs to change.

Evidence is in the fact that when the large flag was unfurled before kickoff, with 64,000 fans watching on, few cheered. Reactions more resembled squirming, with fans uncomfortably looking away from Mississippi’s flag which includes the controversial Confederate battle flag image.

Ole Miss and other state universities don’t fly the state flag because it is viewed by so many as a hate symbol. They want no part of it. Therefore, some want to aggressively show in response that the state flag is something the university and state should be proud of.

But they aren’t getting results that perhaps they hope for. If anything, the more uncomfortable people become seeing Mississippi’s dated flag in a proper reflection, the more we realize it needs to go.

The fact that state leaders refuse to effectively deal with it is troubling. But in the meantime, public discomfort will grow with more displays like the one we saw Saturday.

Eventually, the right thing will be done and Mississippi will have a flag that all its people will embrace.