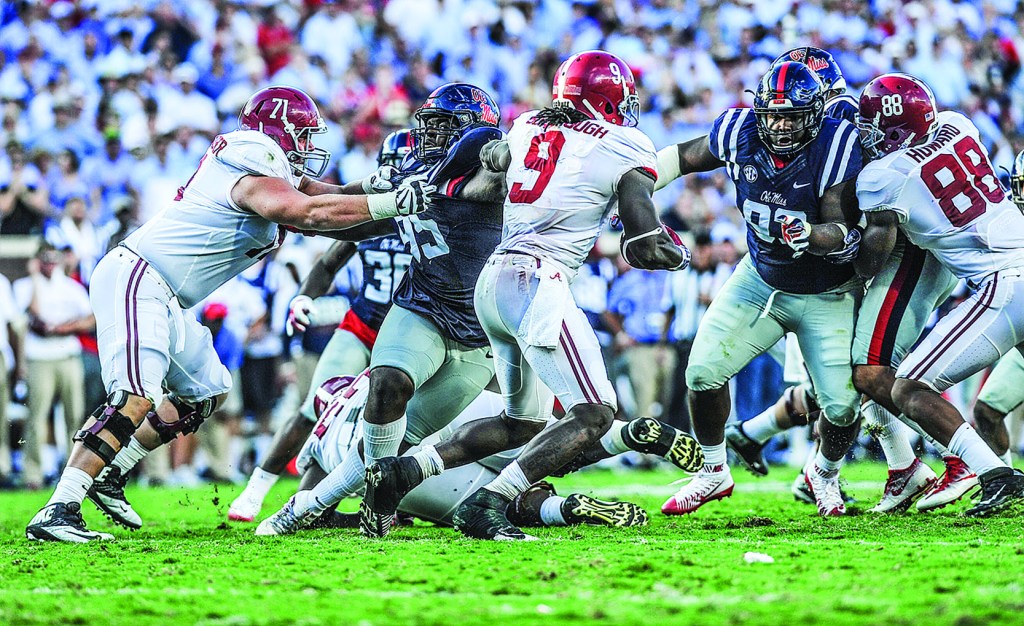 The defensive strategy going into the season for Ole Miss seemed pretty simple: use another deep and talented front to clog running lanes on early downs before getting after the quarterback to help mask the secondary’s inexperience.

The back end of the defense has given up its share of big plays through the air, but the Rebels have had an equally hard time slowing teams down on the ground. No. 23 Ole Miss (1-2, 0-1 Southeastern Conference) is next to last in the SEC in rushing defense, allowing more than 242 yards per game, while surrendering 5 yards a carry and six rushing touchdowns through its first three games, categories in which only Vanderbilt and Kentucky are worse.

“We’ve got to get it fixed,” Ole Miss coach Hugh Freeze said.

It would be easy for the Rebels to blame some of that inexperience as well as injuries for the struggles. Three starters in the new-look secondary are freshmen or sophomores while graduate transfer Rommel Mageo, who’s become a more significant part of the linebacker rotation lately, is still getting up to speed in a new defense.

Ole Miss’ depth up front took a hit against Alabama with ends Fadol Brown (foot) and Victor Evans (concussion) out, and the Crimson Tide took advantage by rolling up 334 rushing yards, the most Ole Miss has allowed since yielding 350 to Texas in 2012.

Freeze hinted Monday that Brown, the Rebels’ bulkiest presence on the edge at 280 pounds, may be done for the season while Evans could return Saturday against No. 12 Georgia (11 a.m., ESPN), but the Rebels surrendered 161 rushing yards to Florida State and 248 more to FCS opponent Wofford with Brown and Evans available for parts of those games.

“We’ve got to do a much better job of playing smarter and fitting things better than what we do,” defensive coordinator Dave Wommack said. “This team is young in some areas and there are some veterans in other areas, and we have to be smarter about our fits across the board.”

Out of place
Freeze said a lack of eye discipline is taking Ole Miss’ defenders out of position at times, leaving the Rebels vulnerable to cutbacks and creases that should be occupied by a defender. Alabama exploited it from every spot on the field with quarterback Jalen Hurts leading the Tide with 146 yards on the ground.

“Guys weren’t fitting,” Gross said. “The defensive line, we were going with the play, and they were rolling out and trying to spread us out. Guys just got to fit.”

The tests will continue Saturday against Georgia star running back Nick Chubb, the SEC’s second-leading rusher. Chubb has showed no ill effects of the gruesome knee injury he suffered last season, racking up 222 yards in the Bulldogs’ opener against North Carolina and 365 for the season.

“They will present a great challenge to us in the run game, and we’ve got to be sure our eyes are disciplined and our fits are correct,” Freeze said. “That has cost us almost every single time you’ve seen us get loose with our discipline that we get hit.”

Ole Miss has five days to work on it.

“Reps. Discipline. Demand it,” Freeze said. “We’ve got to all pitch in to help. This week there’s a big emphasis on that, so I expect to see it better and some things fixed Saturday.”