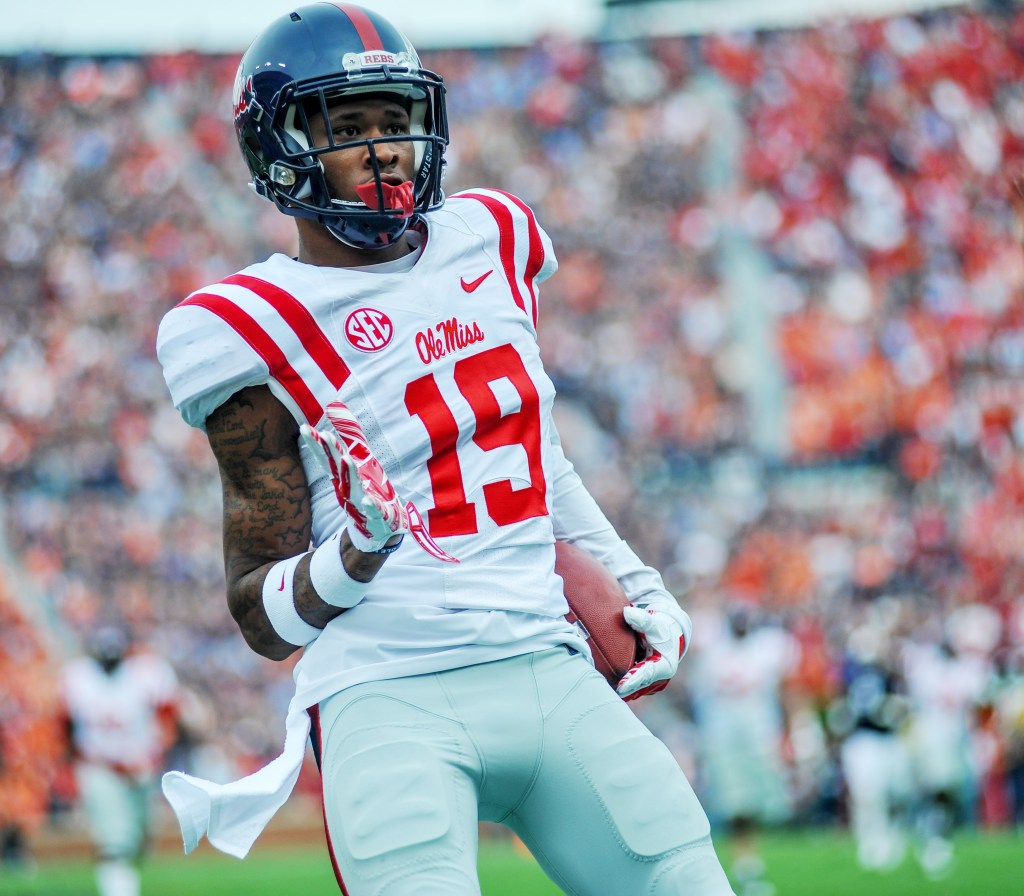 Ole Miss' Derrick Jones (19) dances after scoring against Auburn at Jordan-Hare Stadium in Auburn, Ala. on Saturday, October 31, 2015. Jones could return to the Rebels’ lineup Saturday along with senior offensive lineman Jeremy Liggins after sitting out the first three games for a violation of team standards. (Bruce Newman)

Ole Miss is expecting to get a pair of suspended players back Saturday.

Derrick Jones and Jeremy Liggins aren’t completely in the clear yet, but should both continue to do what the coaching staff has asked of them the rest of the week, they will make their season debuts when the 23rd-ranked Rebels take on No. 12 Georgia at Vaught-Hemingway Stadium (11 a.m., ESPN).

“As of today, they are (available for Saturday),” Ole Miss coach Hugh Freeze said after Wednesday’s practice. “They have to do what we’ve set forth every single day to be ready to go.”

Jones and Liggins have each been held out of the Rebels’ first three games for an unspecified violation of team standards. Jones has been at receiver the majority of the last two seasons while Liggins, a former Lafayette High standout, will provide depth at offensive tackle.

But Jones is back at cornerback, a move Freeze hinted at earlier this season with Ken Webster lost for the season with a knee injury. Jones last played there in a game in 2014.

“I want to see him in the rotation,” defensive coordinator Dave Wommack said of Jones. “He’s a great athlete and gives us some length, so he’ll absolutely get a lot of playing time.”

Liggins’ return would give the Rebels some flexibility along the offensive front. The player most likely to move around is Rod Taylor, who’s been the starter all season at left tackle but spent the last two seasons at guard.

“(Liggins) gives us the ability to move Rod around some, too, and rest some of those guards a little more,” Freeze said. “They’ve played a lot of snaps in the first few games.”

DeMarquis Gates and graduate transfer Rommel Mageo have spent the first three games going back and forth as the starting middle linebacker, but Wommack said some alterations are coming at the position.

“There will be a couple changes with the Mike linebacker in the game, and we hopefully develop some more depth doing that,” said Wommack, who stopped short of naming any names.

Gates has started two games while Mageo got the nod against Wofford, but Wommack has said the Rebels’ defense is at its best with Gates at his more natural outside linebacker spot. Terry Caldwell has started every game at the stinger, or outside, position but played some in the middle a season ago.

After allowing 334 rushing yards to Alabama, the most Ole Miss has surrendered in four years, alignments and assignments have been a heavy emphasis for the defense this week in practice.

So far, so good, though there’s only so much the Rebels’ spread offense can simulate of a Georgia offense that’s got more of a pro-style look to it.

“We’re pretty pleased,” Freeze said. “We’ve got to get in tonight and tomorrow and cut it back even more probably and find out what we like and what our kids feel really good about fitting. They present a lot of issues with all their tight ends and their shifts and their motions and their formations. You’ve got to make sure you’ve got a plan that’s simple enough to adjust to all that.”

Said Wommack, “I’ve seen some improvement in our fits this week, yes.”

With Ole Miss set to take on its third top-15 opponent in as many games against FBS opponents to start the season, one couldn’t blame Freeze if he were ready for the calendar to flip to October.

But win or lose, the competitor in the Rebels’ coach likes the challenge of facing some of the nation’s elite on a weekly basis.

“The way I view things, it’s very enjoyable for me to compete against the best,” Freeze said. “It’s disappointing and hurts and stings and all those things when it doesn’t go your way, particularly when you feel like you had a good enough team to win on that given day. You can’t worry about the last one, man. You’ve got to get excited about the next opportunity, and we’ve got a great one (against Georgia).”