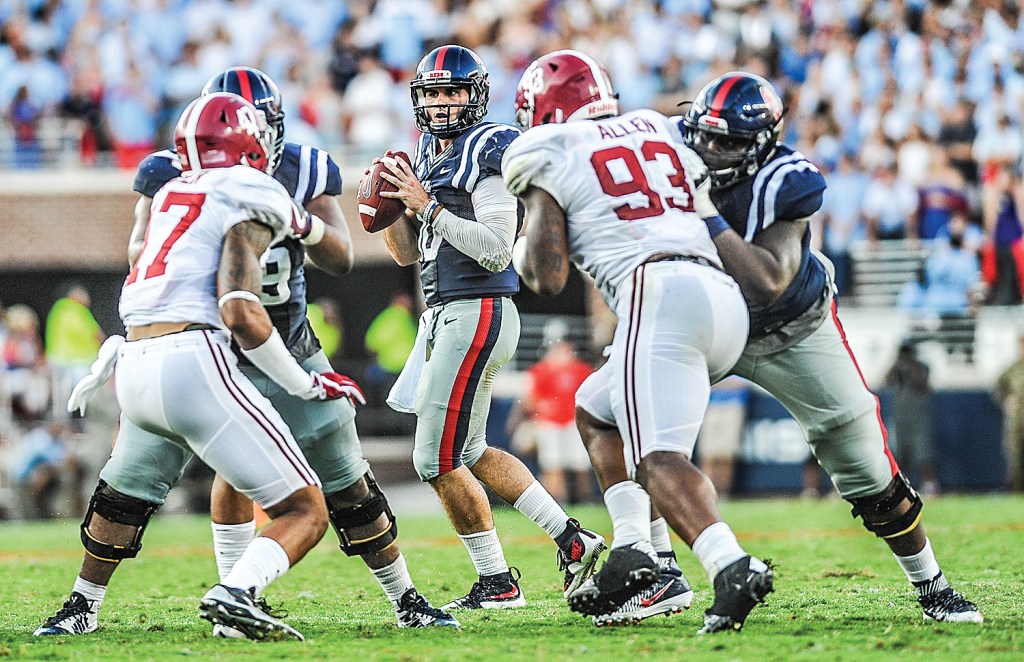 Ole Miss quarterback Chad Kelly (10) looks downfield against Alabama at Vaught-Hemingway Stadium in Oxford last Saturday. The Rebels are striking quickly when they score but aren’t giving the defense much of a break when they don’t, ranking 126th nationally in time of possession. (Bruce Newman)

For a coach who’s leaned on his up-tempo offense to rise through the ranks, it’s no surprise Hugh Freeze likes to go fast.

Ole Miss’ offense has been an efficient, quick-hitting machine when it strikes. The Rebels have put together 18 scoring drives this season with none of them taking more than 4 minutes, 16 seconds off the game clock. Their longest yet — a 92-yard march against Wofford — lasted just 3:01.

“That’s our offense,” quarterback Chad Kelly said. “We like to go fast.”

On the flipside, the offense is even quicker to get off the field when it’s not scoring.

Ole Miss is ranked 126th nationally out of 128 FBS teams in time of possession, holding the ball for a little more than 22 minutes a game. The Rebels possessed it for just 24:37 against Alabama despite the offense producing 36 of their 43 points with the longest scoring drive lasting 4:16 — and the longest touchdown drive taking just 2:24.

“It’s a catch-22 for a coach if we go too fast and score or too fast and out, but the problem is when we slow down, we aren’t nearly as effective offensively and defenses can call every single thing they want,” Freeze said. “When we go fast, we’ve been pretty efficient and we score pretty fast. That’s part of the game today.”

Ole Miss had nine other possessions against the Crimson Tide that lasted six plays or less, including going three and out six times. The Rebels’ longest drive that didn’t end in points? 2:05.

The offense knows that’s putting more stress on a defense that doesn’t have as many bodies as it used to up front and in the secondary because of injuries. The Rebels are defending nearly 80 plays through the first three games, including 93 in the season opener against Florida State.

“I hate to say it, but sometimes we might need to slow it down so our defense doesn’t have to be on the field for three parts of each quarter,” Kelly said. “But coach wants us to go fast, and I’m going to keep running the offense the way he wants to.”

Said tight end Evan Engram, “You can either go three and out really fast or you can score really fast. Sometimes we’ll have a long drive, but it’s been really rare this year.”

Some drives have been stopped before they’ve had a chance to get started with the Rebels coughing the ball up.

Ole Miss already has seven turnovers with its minus-1.67 turnover margin ranking 122nd nationally. Kelly has been responsible for six of them, including a pair of fumbles against Alabama that resulted in defensive touchdowns.

“If we go down and score, the defense is happy just as everybody else is happy,” Kelly said. “Just got to make sure we take care of the football and execute every play to perfection.”

The Rebels are trying to find a happy medium along the way.

“The problem has been when conventional wisdom says to slow down and eat some clock, we have not been real good to this point,” Freeze said. “When we go fast, (our players) just believe in it and we do, too. Obviously we’ve been putting up a lot of really good numbers with exception of the turnovers, so it’s a catch-22. It’s a tough deal.”