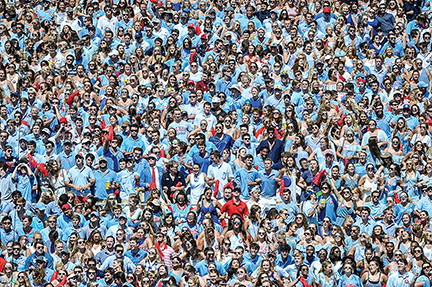 As temperatures hovered around 90 degrees during Saturday’s Ole Miss-Alabama football game at Vaught-Hemingway Stadium, a basic necessity at most sporting events quickly ran out.

No, it wasn’t the patience of Ole Miss fans as they saw a huge first half lead dwindle and eventually evaporate in the second half. What couldn’t be found was ice and water. And it left more than just a few fans steaming.

“There’s no doubt that we ran out of bottles of water,” said Michael Thompson, Senior Associate Athletic Director of Communication and Marketing. “We prepared for a record crowd, there’s no doubt about that. But to give you some historical numbers, the most bottles of water we have ever sold for a football game was just over 24,000 last year during one of the early season games.”

“On Saturday, we sold over 48,000 bottles of water. We knew it would be a big game and thought we were adequately prepared, but obviously we weren’t.”

Thompson said they had 50,000 bottles of water on hand, but it was the perfect storm with a combination of the weather, time of the game and a record crowd.

“The weather was hotter than everyone expected and at that time of the day, the hottest part of the day, it created some problems,” Thompson said. “It was truly amazing how much water was consumed and we did not have enough.”

Thompson said the stadium has run out of bottle water in the past, but it was towards the end of a game.

“But never at the scale we were out so early in a game,” Thompson said.

With temperatures expected to be sunny and in the low 90s again during Saturday’s contest against SEC foe Georgia, Thompson and stadium officials are making sure they do not have a repeat of last weekend’s issue.

“This week we’ll have 80,000 bottles of water on hand, which should be ample,” Thompson said. “And we’ll have an additional ice truck.”

Officials are also working on some other solutions around cooling stations in the stadium to bolster the availability and make sure everyone has access to water.

Four water coolers will be positioned near the cooling stations to allow fans to refill cups of water, according to Thompson.

Kickoff for Saturday’s game at Vaught-Hemingway Stadium is 11 a.m.