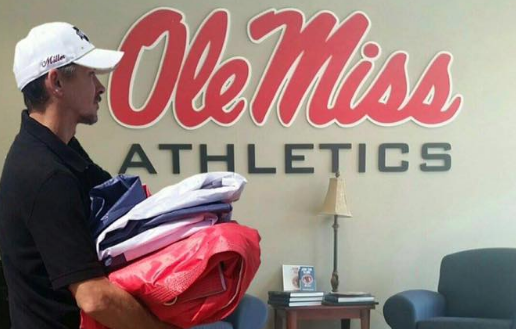 Five days after officials confiscated a large Mississippi state flag that was unfurled at Vaught-Hemingway Stadium before the Ole Miss-Alabama game, its apparent owner came forward to retrieve it.

Many assumed the flag was the property of one or more Ole Miss students advocating for the replacement of the state flag on the university’s campus. As it turns out, the flag’s owner isn’t a student or even an Ole Miss fan, but a supporter of Mississippi State.

A photo of Greenwood resident Steve Miller, who’s a member of the Delta Flaggers – an organization dedicated to defending the Mississippi flag –  emerged on Facebook Thursday afternoon showing him carrying the large flag out of the Ole Miss Athletics building on campus.

A close look at his cap shows the MSU logo and his last name embroidered on the side.

It’s unclear why Miller attended Saturday’s game to watch his team’s in-state rival face off against the Alabama Crimson Tide, especially considering Ole Miss isn’t alone in its removal of the state flag from campus. The state flag was recently removed from multiple locations on MSU’s Starkville campus and doesn’t fly at any public university in the state of Mississippi with the exception of Delta State.

Since the University of Mississippi student government voted to remove the state flag from campus in 2015, outspoken debate has flooded the Oxford community and beyond. It reached a fever pitch during Saturday’s game when many fans argued their rights were violated after the large flag was confiscated, along with smaller flags and signs reading, “Let the Band Play Dixie.”

Sticks, poles and large banners haven’t been allowed in Vaught-Hemingway since 1997, when the university adopted the rule in an effort to prevent fans from waving Confederate flags at football games.

The stadium policy includes additional reasoning, including preventing fans from having an obstructed view and ensuring the university “honors its corporate sponsors regarding signage in Vaught-Hemingway.”

The state flag’s canton features the Confederate emblem and has been a source of controversy for decades.