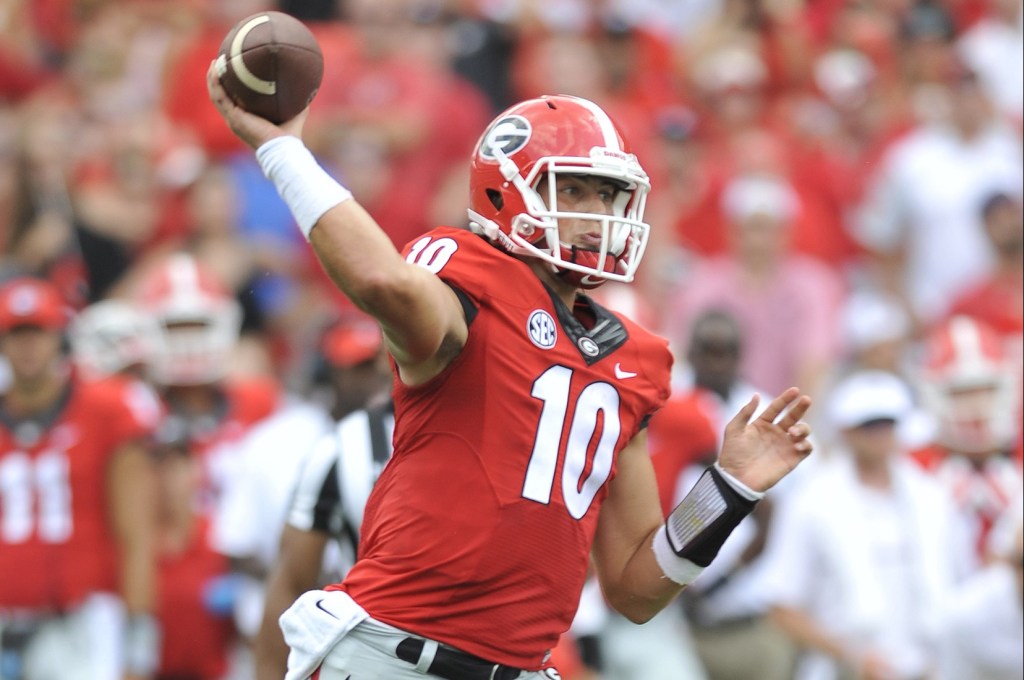 Georgia’s Jacob Eason (10) will be the third freshman quarterback Ole Miss has gone up against in the season’s first month, though the strong-armed 6-foot-5, 235-pounder will challenge the Rebels’ defense more through the air than on the ground Saturday. (Philip M. Williams)

Dave Wommack thought for a second, but Ole Miss’ defensive coordinator quickly gave up as to whether he’s ever had to scheme for three freshman quarterbacks in a four-game stretch.

The 23rd-ranked Rebels will see the next one Saturday when No. 12 Georgia visits Vaught-Hemingway Stadium (11 a.m., ESPN). First it was Florida State’s Deondre Francois followed by Alabama’s Jalen Hurts, and now it will be Jacob Eason, the crown jewel of the Bulldogs’ most recent signing class.

The youth might be the only similarity the trio has. Where Francois and Hurts were also threats with their legs whether it was by design or when things broke down with 205 combined rushing yards against Ole Miss (1-2, 0-1 Southeastern Conference), the 6-foot-5, 235-pound Eason will try to pelt the Rebels from the pocket with the kind of arm strength that made him one of the nation’s top prep signal callers during the last recruiting cycle.

Yet with a young secondary that also surrendered 419 yards passing to Francois as part of numerous explosive plays allowed through the air so far, Ole Miss coach Hugh Freeze isn’t sure the altered style is such a good thing.

“You hesitate to say because you don’t know,” Freeze said. “He may light us up, too. It feels like a different quarterback. He’s gifted. Big arm, good vision and seems to be really poised but doesn’t seem to be like the two that really hurt us.”

Eason has gotten the nod under center the last two games for Georgia (3-0, 1-0), including a 28-27 win over Missouri last week in his first road start. With Missouri clamping down on Nick Chubb and the Bulldogs’ running game, Eason threw it 55 times, completing 29 of them for 308 yards and the winning touchdown on his final throw of the night.

Eason has thrown for 643 yards while having minus-21 yards rushing, most of that attributed to sacks.

Getting to Eason starts with following the blueprint drawn up by Missouri, which limited Chubb to just 63 yards on 19 carries. But the Rebels expect to see a heavy dose of the SEC’s second-leading rusher as the Bulldogs try to keep things manageable for their young signal caller on later downs.

Run fits have been a big emphasis for Ole Miss during practice this week after yielding 334 rushing yards to Alabama, the most the Rebels have allowed since 2012. Freeze and Wommack both said they liked what they saw through the team’s first few practices, though it’s difficult for the Rebels’ spread offense to simulate exactly what the defense will see Saturday from a Georgia offense that operates more out of a pro style under former Arkansas offensive coordinator Jim Chaney.

It’s up to the Rebels to cramp Eason’s style.

“The guy’s got an unbelievably strong arm,” Wommack said. “At times, obviously he’s going to make freshman mistakes, but he hadn’t made enough of them for them not to be 3-0 right now.”