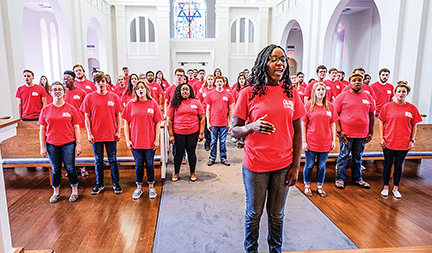 Stella Mbugua and the University of Mississippi Concert Singers take part in a worldwide performance for World Peace Day. The choir's performance in Paris-Yates Chapel was live-streamed on the internet.

As World Day of Peace was observed around the globe Wednesday, the University of Mississippi Concert Singers joined their voices as part of a worldwide choral cry for peace that live-streamed on the internet.

Led by Don Trott, director of choral activities, the 50-member group participated in a worldwide effort to promote peace through the singing of a South African song titled “Ukuthula,” which translates into “peace.”

The live performance aired at 2:30 p.m. on USTREAM under the group designated “AVoice4Peace.’ A pre-recorded performance of the UM Choir will be added to many from around the world on a website called “AVoice4Peace” at http://avoice4peace.org/#a-day-for-peace.

“The idea for this worldwide choral celebration of peace was that of Ken Wakia, the conductor of the Nairobi Chamber Chorus from Nairobi, Kenya,” Trott said. “This choir performed in the Ford Center last November as part of their USA tour and included a performance of ‘Ukuthula.’

“Ken and Kevin Fenton, choral director at Florida State University, came up with the idea to organize many, many choirs to come together in this worldwide choral cry for peace.”

“Ukuthula” (pronounced oo-goo-too-lah) is a prayer set to music. Loosely translated, the lyrics say, “In this world of sin, the blood of Jesus brings peace, redemption, praise, faith, victory and comfort.”

“It’s wonderful being a part of something so heartfelt and meaningful,” Trott said. “All the students have been very passionate about this experience, both in rehearsals and in performances. It’s really amazing to see them sing as a form of self-expression and connect in this beautiful, unique way.”

Stellah Mbugua, one of the members of the Nairobi Chamber Choir who came to UM on their tour, sang background on “Ukuthula” then. She is pursuing a Master of Music in choral conducting at UM this fall and has become the featured soloist for the UM Choir’s performance.

Mbugua, 27, said she initially was hesitant about being the soloist, even though the song’s message resonates deeply within her.

“I’ve never led this song before and was very nervous about doing so,” she said. “But as I’ve sung it, I felt this energy making me stronger and compelling me to sing.

“No matter where we are from, music truly connects us. This song brought together people from all over the Earth and turned us into once voice for world peace, which is something I really believe in.”

Besides the website, a documentary about the “A Voice 4 Peace” experience is being filmed, Trott said.

World Peace Day — officially The International Day of Peace — is observed annually on Sept. 21. It is dedicated to world peace, specifically to strengthening the ideals of peace, both within and among all nations and peoples. Organizers hope that it will become the occasion for a temporary ceasefire in combat zones for humanitarian aid access.