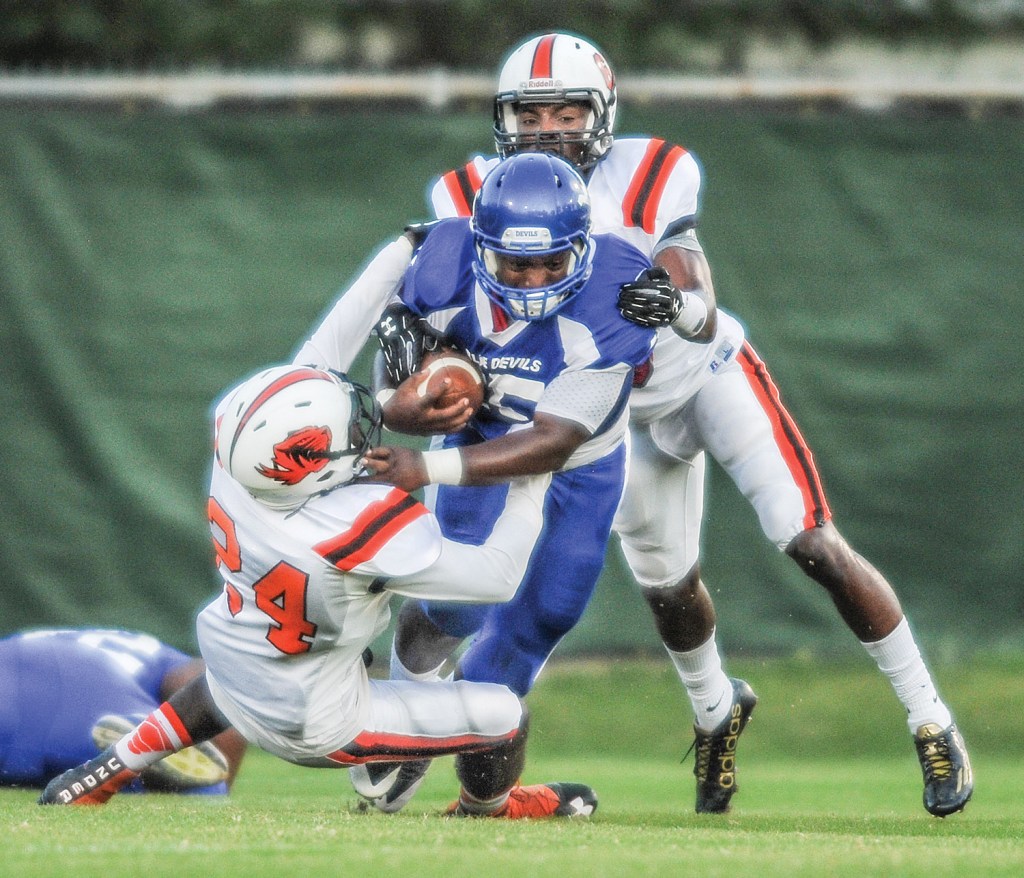 Running back Taghee James (15) and the rest of the Blue Devils will try to end a three-game losing skid Friday against Winona. (Friday)

It’s another week in the high school football season, and it’s another week of Water Valley working to improve. The Blue Devils have hit a skid of three straight losses where they have been outscored 149-24, the most recent being a 63-10 loss at Senatobia last week.

As has been the case all season, Water Valley coach Brad Embry has been telling his players to forget about what’s happened in the past or even what happened in the previous play on Friday nights. He knows his team is young and even though the scoreboard is not indicative of it, there is a belief that the Blue Devils are improving.

“I still think our attitude is pretty good,” Embry said. “You know, we’re human. We’ve had a tough couple weeks here lately. We’re playing a lot of young kids. We played a JV game (Tuesday night) and got after it pretty good. So I think that helped some, just to get a better taste in your mouth. It is what it is. They’re going to play some Friday night as well.”

Youth has been the key theme for Water Valley (1-4) this season and it will continue to be for the remainder of it. The goal is for Embry to get his squad as ready and prepared as they can be heading into Region 2-3A play next week as they will host powerhouse Charleston next week. But first, they must get ready for a Winona team that is coming to Bobby Clark Field this Friday (7 p.m., 105.5 FM).

It is just the second game played at home for the Blue Devils — and first of a short two-game home stand — this season.

“We’ve talked about the level of competition we’ve played with and it didn’t kill us,” Embry said. “If it doesn’t kill you, it makes you stronger.”

Winona (3-2) comes into the game off a 28-0 loss to West Lauderdale. The last time Water Valley and the Tigers met, it resulted in a 20-9 Blue Devil win at Winona last season.

The Tigers are led by senior quarterback Jatyler Moore, who is 62 of 106 for 616 yards and nine touchdowns. He has also thrown four interceptions. The running attack is led by sophomore DJ Ringo, who has 71 carries for 461 yards and four touchdowns.