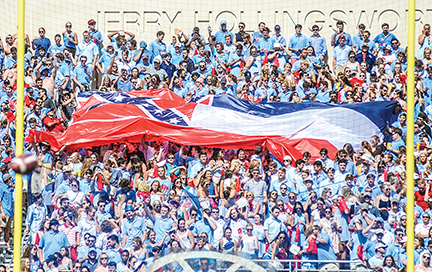 Mississippi’s Sons of Confederate Veterans and other pro flag groups in the state are winning this war.

The strategy is simple, but effective: Keep the political process in a jumble so nothing can pass when legislators convene, and keep key leaders talking about a public vote – because a public vote will not likely pass.

“It’s going well,” a SCV member said recently, about the effort to keep the Confederate battle emblem on the Mississippi’s controversial flag. “We don’t think (the current flag) is going away any time soon.”

They were worried last year, for a moment, when Mississippi House Speaker Philip Gunn, R-Clinton, publicly said the state needs a new flag and invoked God.

“As a Christian,” Gunn said in June 2015, “I believe our state’s flag has become a point of offense that needs to be removed. We need to begin having conversations about changing Mississippi’s flag.”

Amen, Mississippians cried out, happily sharing the news across the state by the thousands.

Some, like Clarion-Ledger editor Sam Hall, proclaimed Gunn a hero.

This, Hall wrote, is “what political courage looks like.”

But such courage is hard to hold when pressure comes from the small-but-potent Sons of Confederate Veterans membership and allied political leaders like fellow Republicans Lt. Gov. Tate Reeves and Gov. Phil Bryant.

By the time Mississippi’s 2016 legislative session rolled around and a myriad of bills related to Mississippi’s flag both for and against popped up in committees, Gunn was relatively quiet – passively aggressive for the other side, one might say.

He even seemed to change his tune publicly by the end of the session, using language that sounded very similar to the pro-flag strategy.

“People voted on it in 2001,” Gunn said in February 2016, altering his stance from months before. “I don’t think it’s right for us to undo what they did. The people should decide for themselves.”

It’s true that the day after this statement, once word came that all flag bills died in committee, Gunn issued a public statement saying that he had not actually changed his mind on the flag.

“I have explored every option from taking legislative action to change the flag to adopting two official flags, but we cannot get a consensus on how to address the issue,” he said.

Mississippi needed a leader to find a clear path and build consensus to keep it away from a public vote. That’s what the House speaker does. Instead, legislators submitted this jumble of ideas to confuse the matter, to try and prove to the public that a statewide vote is the only way the flag issue can be addressed.

“If the citizens of our state want to revisit that decision,” Lt. Gov. Reeves said after no bills emerged from committees during the legislative session, “and I am sure at some point we may, it will best be decided by the people of Mississippi, not by outsiders or media elites or politicians in a back room.”

So far, the strategy is working, and that is exactly what the Sons of Confederate Veterans, Delta Flaggers and other pro-flag groups want – keep it out of legislative hands and moving toward a vote.

Saying let the people decide is an easy out for the politicians. And, it is a victory for those who don’t want the flag changed, since a public vote will likely have the same result as 2001, when two of every three voters in Mississippi said leave it as is.

Tactics for keeping the current flag in place, if it comes to a vote again, will include holding the election at an off-cycle time when minorities aren’t as likely to mobilize, and keeping the option for change unclear.

Furthermore, the flag debate is wrongly being framed by those who want to keep the flag as a conservative vs. liberal issue, which keeps the pressure on politicians to stick closely together.

But Gunn, Reeves Bryant and others fail to recognize that a Mississippi flag vote could rip this state apart, if not leave blood in the streets.

Outside influences would pour in, racial tensions would rise, demonstrations would need police protection, and then police and citizens would be in danger, because those things haven’t gone so well around the country in recent years.

Lord knows, it’s not 2001 anymore. No reasonable politician who truly loves this state would want to push us in that direction.

But that’s where we are heading in Mississippi, unless those who want a new state flag get a better attack, quickly.

The next legislative session is now just months away. We need to help Gunn find one clear strategy to push, so no excuses, and then help him find the support to get it out of committee and into more public light.

Because we can’t let Mississippi suffer a public flag vote. It would cripple this state.