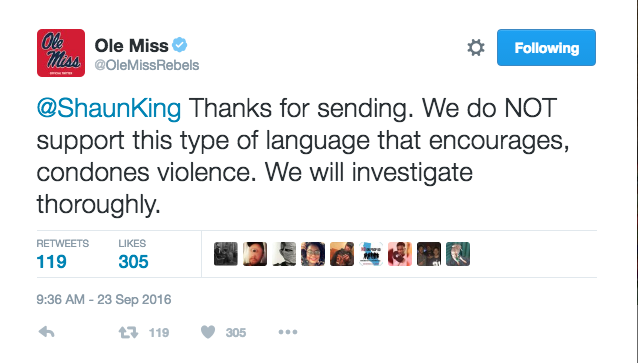 The University of Mississippi Twitter account has responded to a tweet from New York Daily News writer Shaun King featuring screenshots that appear to show a racist, threatening comment from an Ole Miss student.

@ShaunKing Thanks for sending. We do NOT support this type of language that encourages, condones violence. We will investigate thoroughly.

The screenshot in question appears to be a comment thread on a video of the Charlotte protests shared by student Andrew Soper, who’s currently leading a student campaign to restore the state flag on campus.

Jordan Samson, whose now-hidden or deleted Facebook profile says is a current student at the university, responded with, “I have a tree with enough room for all of them if you want to settle this Wild West style,” referring to black protestors in the video.

Read the full thread below.