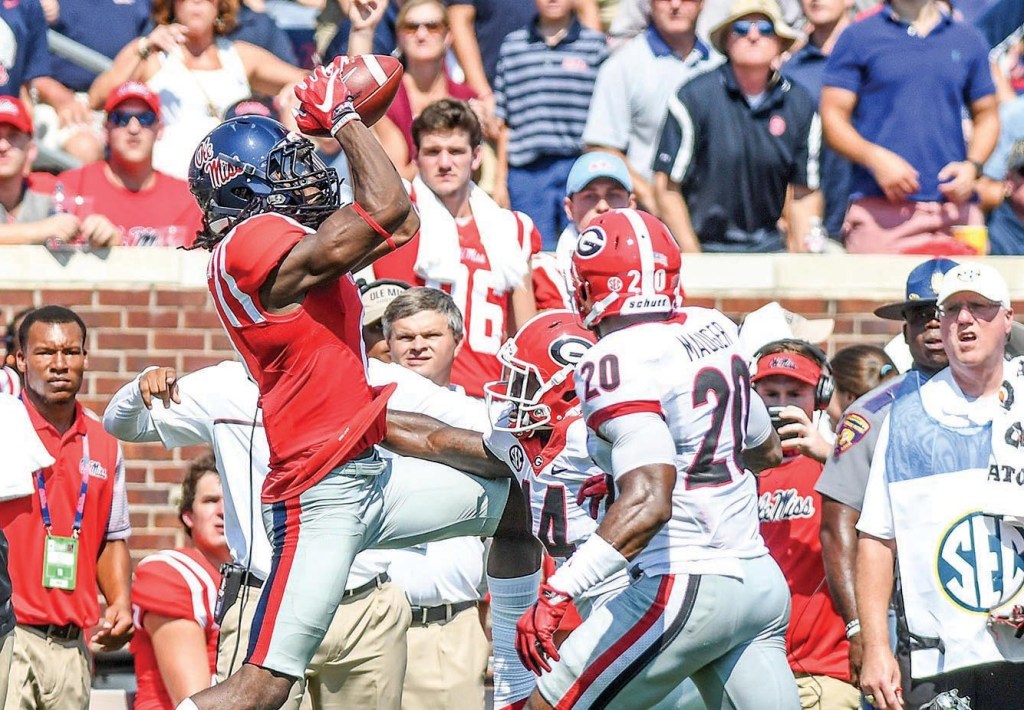 Hugh Freeze didn’t think his team would let the disappointment of yet another second-half collapse linger. Many of Ole Miss’ players said as much.

Once they took the practice field together again after the 24-3 lead turned 48-43 loss to Alabama and Freeze began to pick up on his team’s silent demeanor, he figured that meant good things.

“We were not emotional, no passion, and my gut told me all week that it’s a great sign,” Freeze said following the Rebels’ 45-14 drubbing of Georgia on Saturday. “They’re disappointed, they’re ticked, and they’ll be ready to go.”

That turned out to be an understatement.

Numerous players spent much of their frustrated time in the media room after the loss to Crimson Tide talking about how the Rebels would respond. The way in which the Rebels lost to Florida State and Alabama stung and they would have to finish in the future in order to avoid history repeating itself, but there wasn’t going to be any quit from a team that already had a dent put in its high hopes for this season.

At least that’s what they said.

The Rebels put those words into action Saturday, once again grabbing a big lead but never letting go this time. Ole Miss’ offense did what it usually does with Chad Kelly at the controls, but it was the Rebels’ defense that showed some life by getting after freshman quarterback Jacob Eason, who, unlike FSU’s Deondre Francois and Alabama’s Jalen Hurts, couldn’t avoid the Rebels’ pressure with his feet once Ole Miss contained the Bulldogs’ running game enough in the early going.

By the time it was over, Ole Miss had its largest margin of victory over a top-25 team in 47 years and an emphatic vow on its word.

“Everybody was locked in and everybody knew what they had to do,” defensive tackle D.J. Jones said. “We were not going to lose this game.”

It’s important to note because so many of these players talked in the offseason about the goal this fall being to continue the Rebels’ rise in relevance in their league by winning a Southeastern Conference championship and being in the mix for a playoff berth.

The national title aspirations are far-fetched at this point. A loss to Georgia, and any hopes of winning the SEC’s rugged Western Division would’ve been all but out the window, too, with the season less than a month old. A loss to Georgia, and it might’ve been hard to turn this thing around with a schedule that’s just as daunting these next two months starting with a trip to Arkansas following next week’s game against Memphis and an open date.

Freeze often refers to that rise during his tenure as being in the fight, and because Ole Miss followed through on its vow with a no-doubter Saturday, the Rebels will still be in the West race come October.

“I think there’s still a chance for all those championship talks whether it’s SEC or playoffs or whatever,” center Robert Conyers said. “If we keep winning, we can control what we can control.”

It’s still an uphill climb. Alabama, which rarely loses in the regular season under Nick Saban, has a two-game lead over the Rebels with its head-to-head win, and Ole Miss still has to play three ranked teams on the road in Arkansas, LSU and Texas A&M, which doesn’t account for games against Auburn and Mississippi State at home.

But Ole Miss has shown it can play with some of the best teams the nation has to offer, and on Saturday, it finally showed a killer instinct.

The Rebels will need that and then some as they play some more meaningful games starting next month.