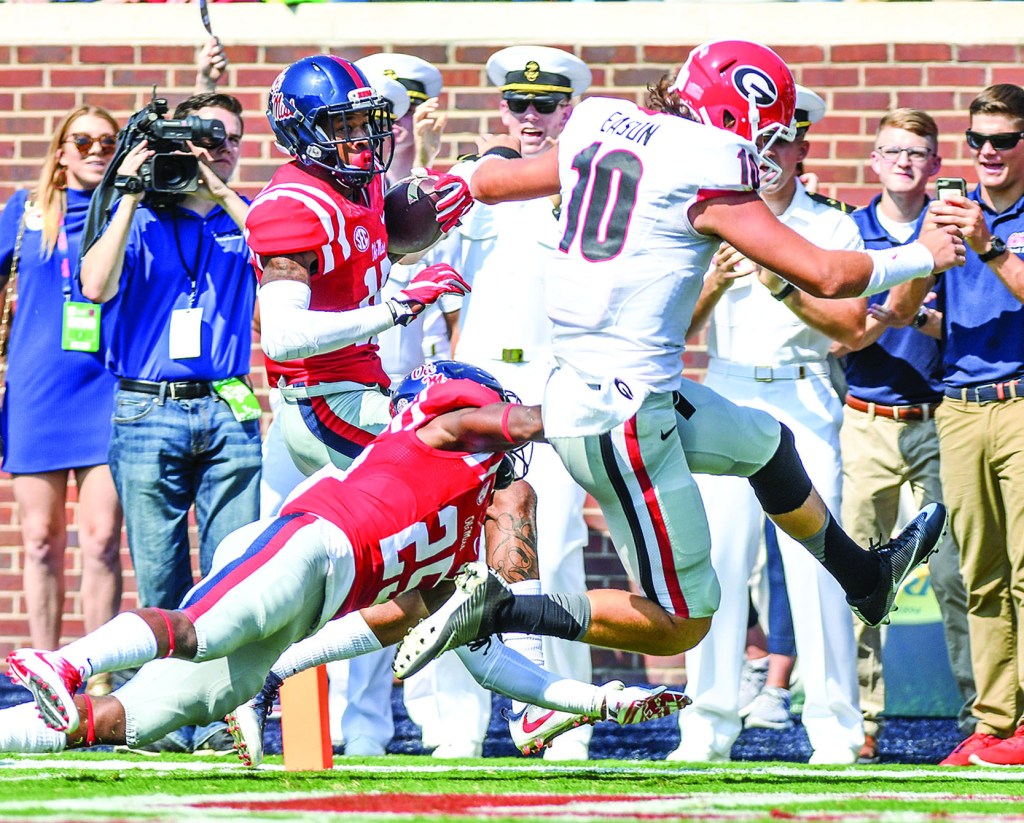 After missing the first three games due to violating team standards that were never disclosed, Ole Miss cornerback Derrick Jones made his first appearance of the season Saturday.

It did not take long for the senior to make an impact, intercepting a Jacob Eason pass for a 52-yard pick-six midway through the first quarter. Earlier in the week, head coach Hugh Freeze said Jones, along with offensive lineman Jeremy Liggins, was on track to return to the field this week if they continued to do the necessary things asked of them by Freeze.

Jones, who played receiver most of the last two seasons, finished the game with the Rebels’ lone interception of the game and one tackle.

“I think all of us enjoy a redemption story,” Freeze said. “All of us have made mistakes. (Jones) has certainly been in his payment plan to get reinstated with this team for a long time. I love him and really, really proud to see him get back with us and then to see him make a play was really nice.”

The middle linebacker position has been in a rotation of sorts when it comes to who will start there each game.

Oregon State transfer Rommel Mageo has taken his turn. So has DeMarquis Gates. Saturday against No. 12 Georgia, it was Detric Bing-Dukes’ turn. The sophomore got his first career start and on the very first play of the game, Dukes introduced himself to Georgia’s Nick Chubb for no gain.

Dukes was the leading tackler for most of the game with seven, four of them unassisted, before Gates, who started alongside Dukes on the outside, finished with nine. It was a game that had meaning for the junior college transfer and former member of the Georgia football team before transferring to Iowa Western Community College and then eventually finding his way to Ole Miss.

“He gets up lined up and he knows,” defensive coordinator Dave Wommack said of Dukes earning the start. “I knew it’d be a special game for him, and he had a good week at practice. We’ve been trying to get a bigger, more physical guy in there for situations, and this game dictated it.”

Turnovers have been an abnormal issue for quarterback Chad Kelly. Through the first three games of the season, Kelly accumulated three interceptions and three fumbles (one against Florida State and two against Alabama).

Saturday against Georgia was a different story. The senior was much more protective of the ball and did not throw an interception or fumble against the Bulldogs in the 45-14 win.

“Yeah, I was patient in the pocket, “ Kelly said. “I felt good. Those guys up front did a great job of giving me time, and we were able to run the ball. The coaches gave me more freedom to change the play call a little bit, so I was able to put us in some good situations.”

Kelly threw a touchdown in his 17th consecutive game, passing Eli Manning for a new school record. … The 31-0 halftime score represented the first time Ole Miss had a shutout in the first half since last year’s season opener against UT Martin. … The win snapped a 10-game losing skid to Georgia dating back to 1997.