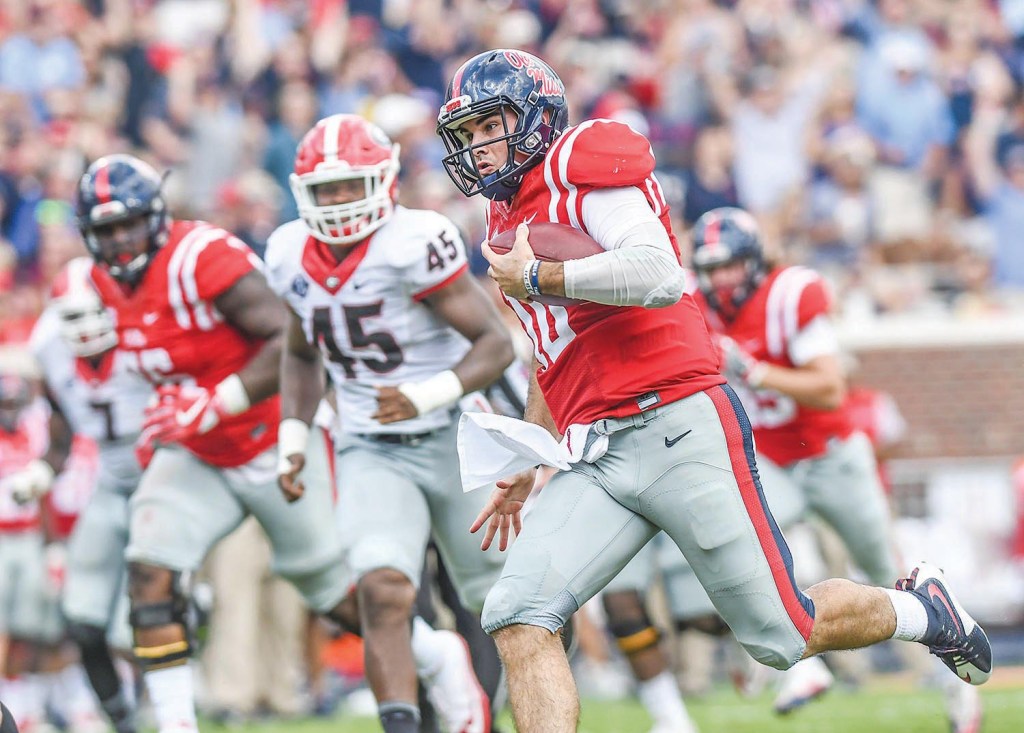 Ole Miss grabbed yet another big lead against an FBS opponent.

This time, the Rebels didn’t relinquish.

No. 23 Ole Miss went up on Georgia 17-0 in the first quarter and added on from there, putting its collapses against Florida State and Alabama in the past at least for a day by knocking off the 12th-ranked Bulldogs 45-14 in front of 65,843 Saturday at Vaught-Hemingway Stadium.

The win ended the Rebels’ 10-game losing streak in the series dating back to 1996. It was Ole Miss’ largest margin of victory over a top-25 opponent since a 38-0 shutout of Tennessee in 1969.

“I think everybody on the sideline, everybody was like, ‘Wait, we’re not doing this for a third time,’” Ole Miss center Robert Conyers said. “We all looked at each other, and it was still a lot of fire to go keep scoring.”

Ole Miss (2-2, 1-1 Southeastern Conference) racked up more than 500 yards of offense for the second straight week while the defense turned in its best performance against a team not named Wofford. Quarterback Chad Kelly completed 18 of his 24 attempts for 282 yards and two touchdowns while adding his first rushing touchdown — a 41-yarder — to make it 45-0 early in the third quarter before giving way permanently to Jason Pellerin, who had the Rebels’ third touchdown toss on a 5-yard shovel to Eugene Brazley.

Pellerin was intercepted early in the fourth quarter while being hit, but it was Ole Miss’ only turnover after the Rebels coughed it up seven times through the first three games with Kelly being responsible for six of them.

“The reality is if we don’t turn the ball over (against Florida State and Alabama), we don’t talk about all those strategy things,” Ole Miss coach Hugh Freeze said. “That’s what happened to us. We turned it over in both of those games.”

A season-high 180 rushing yards helped open things up for the passing game. Kelly’s first scoring toss went 55 yards to DaMarkus Lodge early in the second quarter while he found Evan Engram from 9 yards out just before halftime to make it 31-0, a five-play, 58-yard drive motivated by the momentum Freeze felt Florida State and Alabama created toward the end of the first half in those losses in part because of a conservative approach.

“I’m probably better if I just go with my gut,” Freeze said. “We had three timeouts, too, though. We were going to call everything we wanted to call at that point.”

D’Vaughn Pennamon scored his first career touchdown on a 1-yard run. Georgia avoided the shutout with 10- and 1-yard scoring runs from Brian Herrien in the second half.

But the substantial lead allowed Ole Miss to get after Georgia freshman quarterback Jacob Eason, who finished 16 of 36 passing for 137 yards with an interception returned 55 yards for a score by Derrick Jones, who played for the first time this season after serving a suspension. The Bulldogs (3-1, 1-1) in the second half were without star running back Nick Chubb, who had 56 yards on 12 carries before going out with an ankle injury.

Georgia had 230 rushing yards with 137 of those coming in the second half against reserves on most snaps. Ole Miss notched three sacks and hurried Eason nine other times with his longest completion covering just 19 yards.

“Our motto was stop the run and have fun,” defensive tackle D.J. Jones said. “You stop the run, you get to rush the passer. That’s what we did today.”