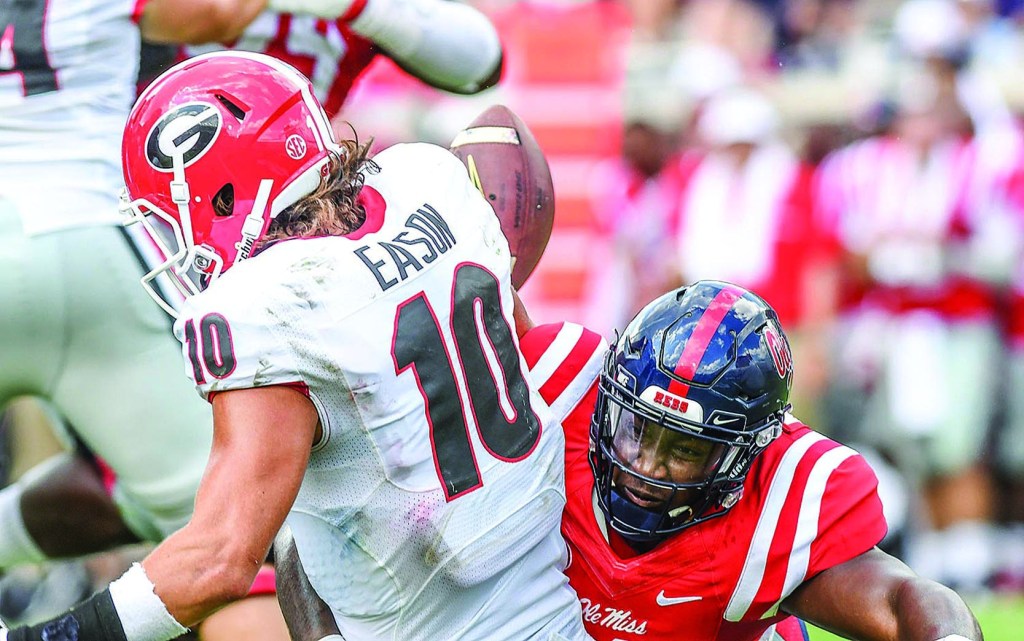 Getting off the field quickly and forcing three and outs was becoming a problem for the Ole Miss defense against teams who were not named Wofford. That changed on Saturday as the Rebels dominated No. 12 Georgia’s offense consistently in their 45-14 win.

Florida State and Alabama converted nearly 50 percent of their third-down opportunities, fueling their come-from-behind victories that have been well documented by now. Georgia did not come near that as the Bulldogs went 4 of 16 on third downs for a 25-percent clip.

“We cut loose some of that pass rush, and we did a great job of the routes that (Georgia) was running a lot,” defensive coordinator Dave Wommack said. “We just pattern-matched a lot of things. Our (defensive) line got tremendous pressure on them.”

True freshman quarterback Jacob Eason was sacked three times and hurried nine times, causing Georgia to try and rely on its bread and butter, which is the running game. Nick Chubb and Sony Michel did not have the success most expect them to have against defenses in the Southeastern Conference, rushing for a combined 123 yards on 23 carries and zero touchdowns. Chubb left the game after an ankle injury late in the second quarter and did not return.

“They’re a running team. Our motto is stop the run and have fun,” nose tackle D.J. Jones said. “You stop the run, you get to rush the passer. That’s what we did today.”

Georgia was 1 for 11 on third downs into the third quarter, but once Ole Miss started subbing out some of its starters, the Bulldogs started to be able to move the ball and convert during the fourth quarter. The two touchdowns came on the ground but were scored by No. 4 running back Brian Herrien, who led the Bulldogs with 78 yards on 11 carries.

Another challenge Ole Miss had defensively was the inability to use an entire package in the fourth quarter. Carlos Davis suffered a stinger during the first half and did not return. Montrell Custis suffered an injury as well, causing Wommack to not be able to use the Rebels’ dime scheme.

“We did what we had to do,” Wommack said.