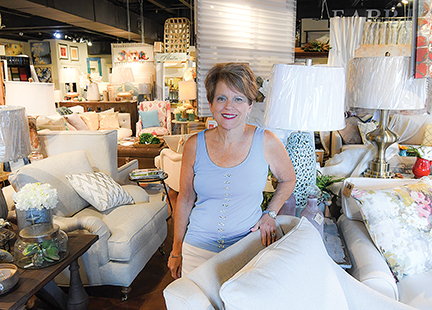 Becky Huelse is the owner of Something Southern.

An online magazine recently named Mississippi the best place for a woman to start a business in 2016; however, that was something Becki Huelse already knew.

Huelse, the owner of Something Southern, has been a business owner for the last several years, opening her first design store in Starkville and then later in Oxford.

Something Southern in Oxford started in the CashSaver (then Big Star) shopping center off University Avenue before moving to the Square.

Huelse taught interior design at Oxford-Lafayette County School of Applied Technology for awhile until she realized it wasn’t what she wanted to do. Open her first business, Huelse found Mississippi to be a welcoming place to start her new business.

“No one treated me differently for being a woman wanting to open a business,” she said. “Everyone was very helpful.”

Thumbtack.com analysts studied marketplace data to determine the places where women are most optimistic about their prospects. They surveyed 20,557 women from January to June who own small businesses. Five of the top 10 states are in the South with Mississippi being named the No. 1 place for women to start businesses.

According to the 2015 State of Women-Owned Businesses Report commissioned by American Express, more than 9 million women own businesses nationwide and women-owned businesses are growing 1.5 times faster than the national average.

The number of women-owned firms in Mississippi surpassed the national number of 74 percent growth and increased by 87 percent from 38,321 in 1997 to 72,300 in 2015, according to the report that uses U.S. Census Bureau data.

“If your dream is to open a business, just do it,” Huelse said. “You have to follow your dreams and this is the best place to make those dreams come true.”