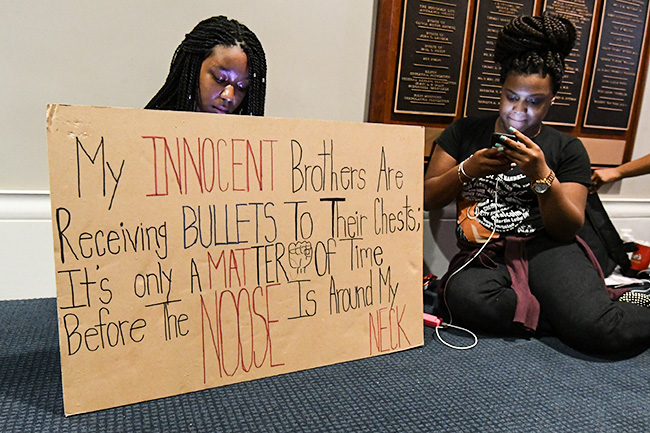 Protest at the Lyceum at the University of Mississippi, in Oxford, Miss. on Friday, September 23, 2016.

This is about so much more than a flag.

That much was made clear Friday afternoon when students protested Chancellor Jeffrey Vitter’s lukewarm response to a student’s viral Facebook comment in which he casually suggested lynching a group of black protesters in Charlotte, North Carolina.

As the university’s chief administrator, Vitter had the option of relaying a message to students that he understands their concern and would handle it accordingly. He also had the option of not responding at all. Instead, he met with student leaders Friday afternoon to discuss their concerns and reassess his initial take on the threatening comment that left many students and faculty fearful, angry and concerned about how the university would respond.

Many opposed to changing the state flag often argue that black Mississippians shouldn’t feel negatively about its Confederate symbolism because “slavery is over.” Some go so far as to say they should “get over it, already,” despite the fact flag supporters don’t seem to want to get over a short-lived confederacy that went down in flames more than 150 years ago.

We’re still fighting unthinkable battles in Mississippi and we all know it’s more, much more, than a student who made a lynching comment.

The argument that the flag is innocuous doesn’t stand in a state that can’t seem to go more than a few months without making headlines for a race-related incident. It makes the flag that much more disturbing because it says to the world nothing has really changed here and we’re proud of it.

Whether they realize it or not, flag supporters aren’t fighting to preserve history.

They’re fighting to repeat it.