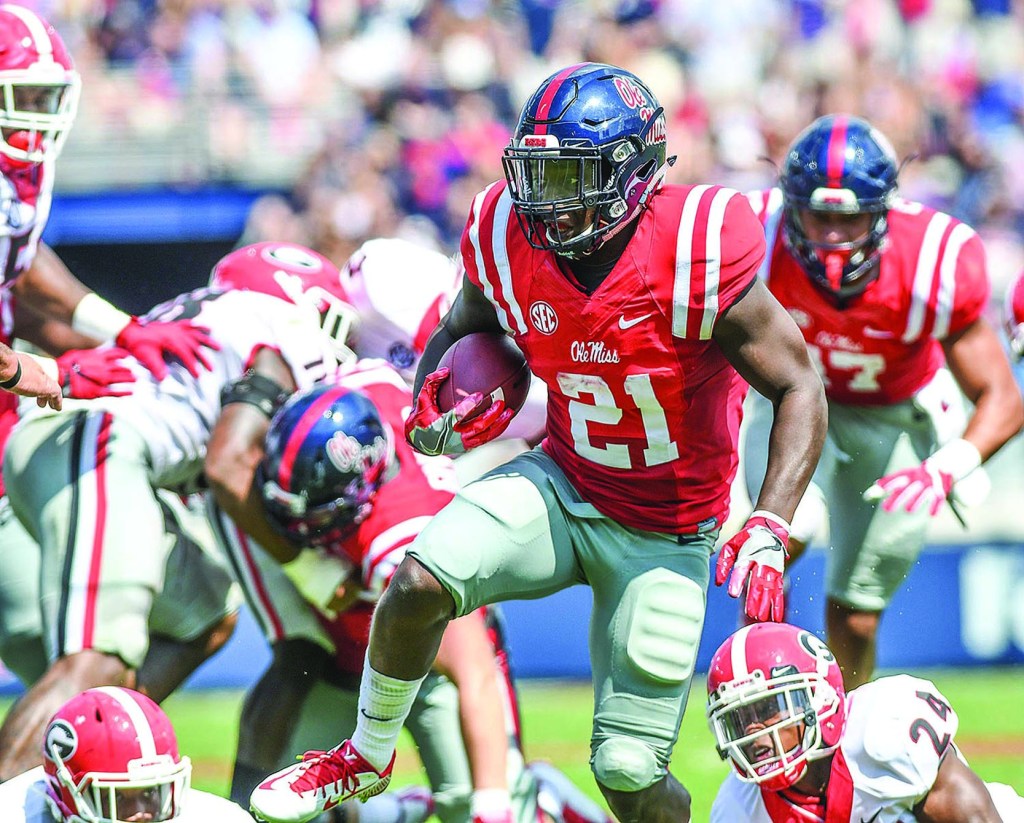 It’s not unusual for Ole Miss to rack up a bunch of yards through the air, but the Rebels have gotten more production on the ground to go with it as of late.

And it’s come against some stiff competition.

No. 16 Ole Miss racked up a season-high 180 rushing yards in its runaway win over Georgia. The most the Rebels (2-2, 1-1 Southeastern Conference) had run for before Saturday was 174 against Wofford, an FCS team.

“I love running the football,” Ole Miss coach Hugh Freeze said. “I think it sets up our pass, and you have to have the appearance that you’re willing to run it.”

Ole Miss is averaging 4.3 yards a carry but picked up some bigger chunks against Georgia, which came in holding opponents to less than 130 yards a game on the ground with North Carolina’s 159 being the most the Bulldogs had allowed until Saturday.

The week before, the Rebels went for 106 on the ground against Alabama, an output most offenses would take against Nick Saban’s annually stout defense, whose 67.5 rushing yards allowed per game ranks fifth nationally. The low numbers against the Tide and Florida State (season-low 67 yards) still have Ole Miss near the bottom of the national rankings in rushing offense (130.5 yards per game), though Freeze said the quality of competition has had something to do with it.

“I’ve said all along I thought that we could (run the ball) before the year’s up,” Freeze said. “I’d love for everybody to look at who is running it on Alabama. We got twice what everybody else got I think, so it’s tough.”

The Rebels’ usual success in the passing game seems to be helping. Chad Kelly threw for 282 yards on 18 completions Saturday in three quarters for the nation’s 17th-ranked passing offense, and with Georgia backing off, the Rebels averaged a season-best 5.8 yards on their 31 runs. Kelly had his most productive day on the ground, running for a team-best 53 yards with 41 of those coming on a third-quarter touchdown.

“I think after a while they realized they need to play a little bit softer so we weren’t throwing it the way we were,” offensive coordinator Dan Werner said. “When that happens, we’ve got to take advantage of it.”

The Rebels were also better in short-yardage situations with the bigger-bodied Jason Pellerin relieving Kelly in that package. Pellerin ran it four times Saturday for 15 yards and found Eugene Brazley for a 5-yard score on a shovel pass.

“We’re working on it a good bit,” Pellerin said. “It’s working in practice, and when game time comes around, I think everybody just has to execute. It looks like we have been.”

But anybody carrying the ball has to have room to run, and Freeze said he feels like his new-look offensive line has provided more of it with each passing week.

“I’ve always been optimistic that I thought this young group could be pretty good before the year is up, and I think there’s enough of a sample size to say, you know what, they might be OK,” Freeze said.