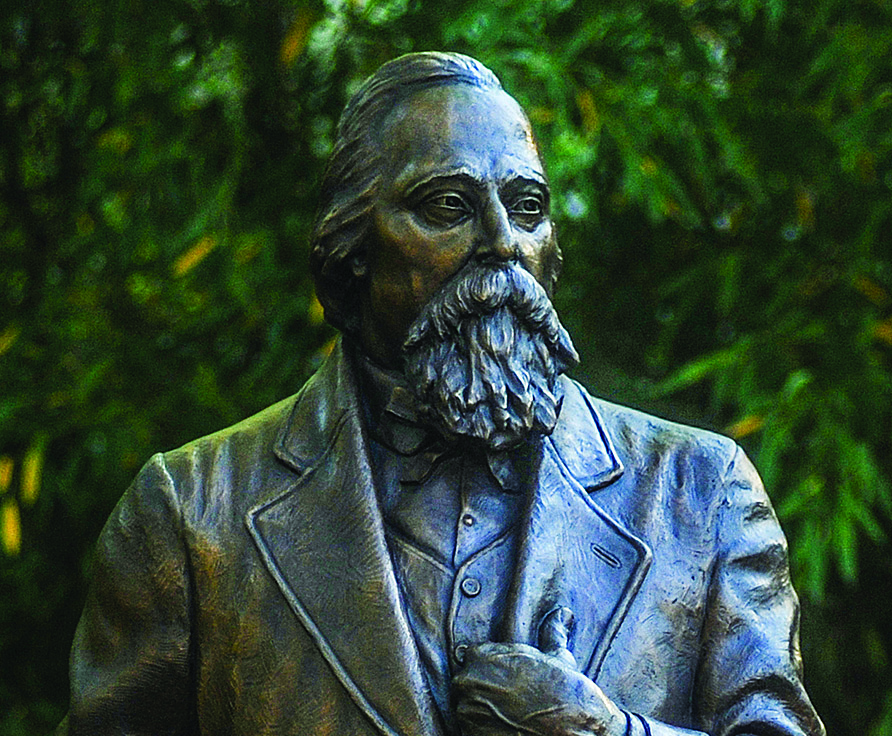 The LQC Lamar statue at the LQC Lamar House in Oxford, Miss. on Saturday, October 9, 2010.

L.Q.C. Lamar will be celebrating his birthday a couple of weeks late this Sunday, among local Oxford residents. He will enjoy some cake and chat with his company in the house he built in the 1880s.

Lamar hasn’t risen from the dead. Local actor George Kehoe will be portraying Lamar at the birthday party sponsored by the Lamar Legacy Friends.

Darlene Copp, with Lamar Legacy Friends, a group dedicated to supporting the L.Q.C. Lamar House and Museum said it’s the group’s mission to try to get more people to learn about Lamar and attract them to the house and museum on N. 14th Street.

“It’s been a difficult thing to do,”

she said. “Each year we try to come up with new ideas and projects to achieve that goal.”

Legacy member and director of the University Museum and Historic Houses Robert Saarnio came up with an idea to have a local actor portray Lamar at community events.

“We loved it immediately,” Copp said.

The idea was to have the actor completely embody Lamar and have him “perform” at different venues around Oxford.

Three actors were interviewed and finally, Kehoe was selected to portray Lamar.

“We want to bring Lamar to life and show he wasn’t some dusty old historic figure who was involved in politics,” Copp said. “He was a father who loved his daughters and his home.”

The first event will be Lamar’s Birthday Bash from 4:30 to 6 p.m. at the Lamar House where cake and refreshments will be served. There will game for children, some dating back to the late 1800s.

“We want people to come and have a good time and leave with a positive attitude of the Lamar House and the man who built it,” Copp said.

Kehoe has been working on getting ready for his new yearlong role as Lamar since being selected by the Legacy group this summer.

“I’ve been doing research and learning more about him,” Kehoe said. “I didn’t know a whole lot about him, to begin with. He was a very complex man of his times. A real thinker and someone who definitely shows a pattern of evolution in a philosophical sense.”

Kehoe has read two biographies about Lamar and many letters Lamar wrote to his family, and of course, his famous speeches.

Kehoe has to not only learn about Lamar but has to answer questions from people in a way Lamar would answer.

“That’s going to be the biggest challenge,” Kehoe said. “There will be a whole lot of improvisation. There will be a lot of just going on the fly and I will have to stay in character the entire time.”

Kehoe is a regular performer, having been a regular member of the Oxford Shakespeare Company during the annual Shakespeare Festival that ended a few years ago. He’s done several shows with Theater Oxford, particularly in the 1990s and early 2000s. He’s also participated independent shows and Ole Miss Theater productions.

“This will be the first time I’ve played the same role for a year,” Kehoe said. “My goal is to be as much in the moment as possible, with the idea of capturing at least some feeling of the man in his times.”