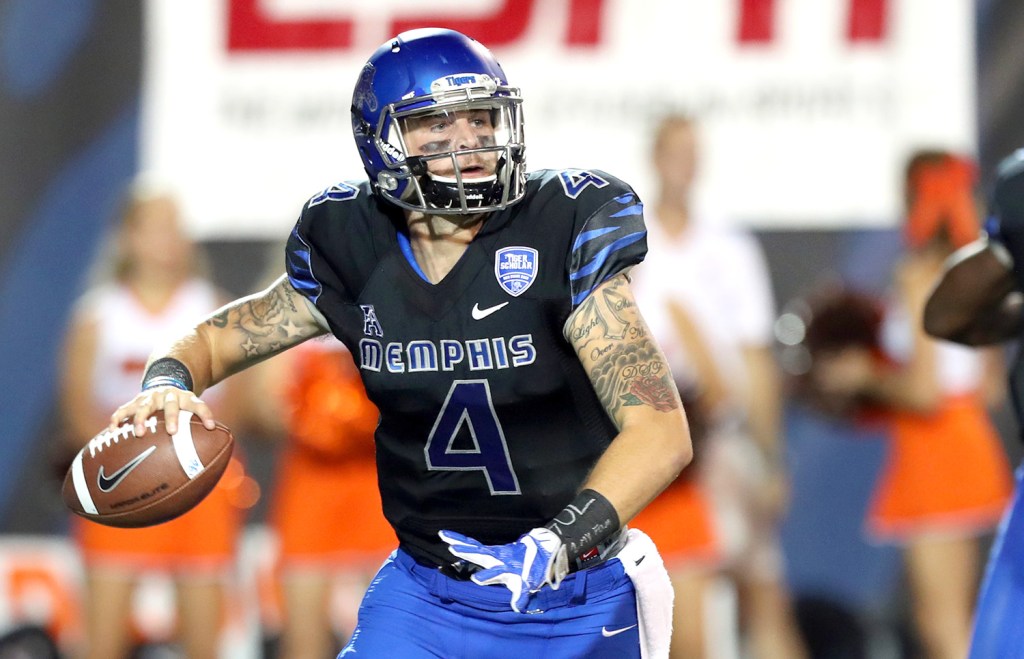 The muggy air is about the only thing that’s made the Tigers sweat in their first three games, outscoring Southeast Missouri State, Kansas and Bowling Green a combined 155-27. Memphis (3-0) hasn’t gotten fancy ahead of Saturday’s matchup with the 16th-ranked Rebels (2-2) at Vaught-Hemingway Stadium because it hasn’t had to.

Yet under first-year head coach Mike Norvell, who was hired from his position as Arizona State’s offensive coordinator in the offseason, Memphis’ offense is similar to the spread attack the Tigers ran under former coach Justin Fuente with Paxton Lynch, a first-round pick of the Denver Broncos this spring, behind center. The Tigers are ranked fifth nationally in scoring (51.7 points per game), 26th in passing offense (293 yards per game) and 34th in total offense (478 yards).

Junior college transfer Riley Ferguson, a former Tennessee signee, has thrown for 843 yards and 11 touchdowns with two interceptions. He didn’t play in the second half of Memphis’ 77-3 rout of Bowling Green last week after the Tigers had the game won at halftime up 56-3.

“They’re going to throw the ball all over the field,” cornerbacks coach Jason Jones said. “The quarterback can make all the throws. You have to do a great job being disciplined with all the (run-pass options) that they run. Our guys, you can’t do somebody else’s job.”

Coaches have seen more motions and gimmicks from this year’s version of the Tigers on film, defensive coordinator Wommack said, but trying to figure out what Memphis will do when under pressure against the best defense it’s seen all season Saturday is virtually impossible.

“They haven’t been under any stress at this point of the season,” Wommack said.

Detric Bing-Dukes found out the Sunday after Ole Miss’ loss to Alabama that he would rep with the first-team defense at practice, a week of preparation that earned him his first start at middle linebacker last week against Georgia.

Bing-Dukes, a transfer from Iowa Western Community College and former Georgia signee, responded with seven tackles against his former team at a position that’s been in flux early on. Bing-Dukes is the third different linebacker to start in the middle.

“I felt like I did good with filling the gaps,” said Bing-Dukes, who spent all of fall camp getting caught up in the Rebels’ 4-2-5 scheme after getting to campus this summer. “I did bust in coverage a couple times. I feel like I can get better at my coverages and just being a vocal leader.”

Cornerback Derrick Jones’ interception returned for a touchdown against Georgia was noteworthy considering it was his first time playing this season.

It was also impressive for a player who hasn’t played defense in two years.

Jones, fresh off a three-game suspension for an unspecified violation of team standards, moved to defense last week after playing all of last season at receiver. Jones is needed on defense now that Ken Webster is out for the season with a knee injury, and the senior didn’t look like he hadn’t played a game at corner since 2014.

“I was surprised at how much he knew,” Jones said. “When we started practicing and he started repping it, he remembered the things that we were doing and didn’t make a lot of mistakes on Saturday. He flew around and went to the ball. Still just got to keep bringing him along.”

Ole Miss’ game against Memphis will kick at 6 p.m. and be aired on either ESPN2 or the SEC Network alternate channel depending on the World Cup of Hockey best-of-three Final. The football game will be on ESPN2 if a third game isn’t needed and on the alternate channel if a third game has to be played Saturday. … Tight end Evan Engram, who leads all FBS tight ends with 26 receptions and 397 receiving yards, was one of eight players Tuesday added to the watch list for the Biletnikoff Award, which is awarded annually to the nation’s top receiver.