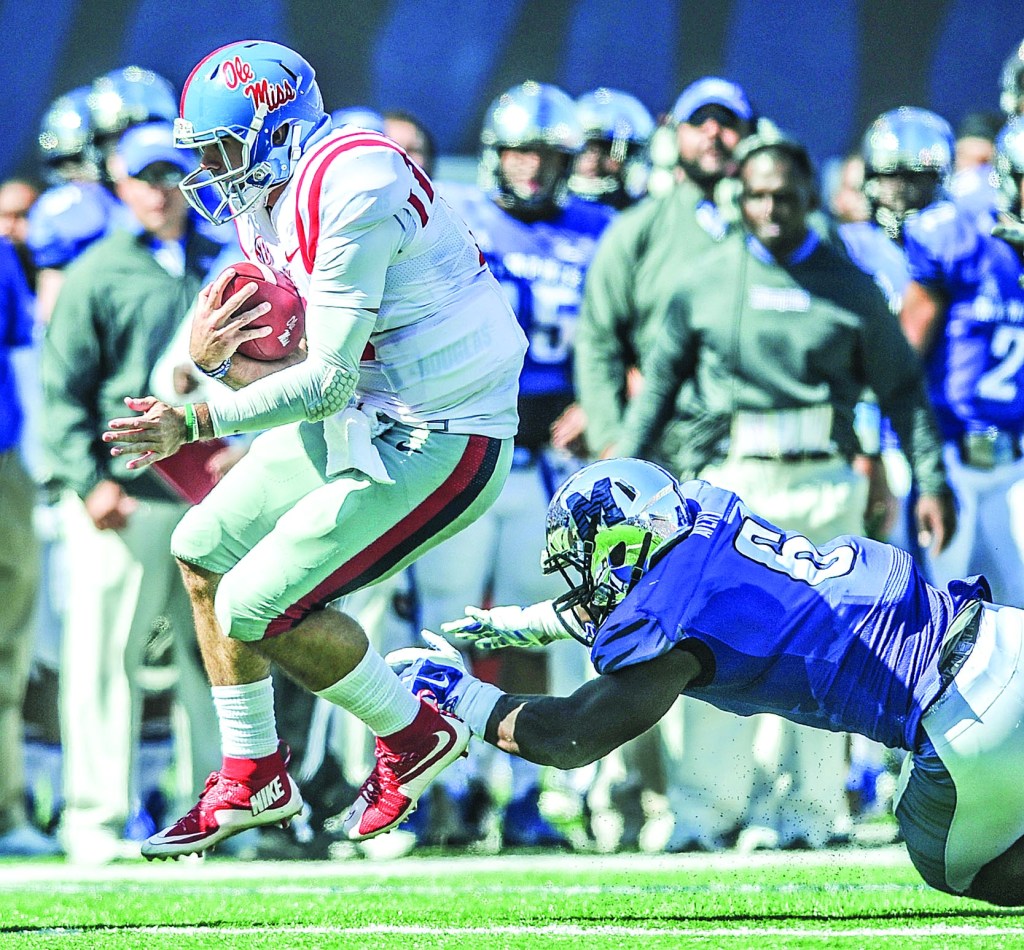 It may have been nearly a year ago, but for Ole Miss’ players, it’s still vivid.

“We went up there and got embarrassed last year,” defensive end John Youngblood said, referring to the Rebels’ short trip to the Liberty Bowl last October that ended with a shocking 37-24 loss to Memphis.

Yet the 16th-ranked Rebels aren’t harping on revenge ahead of this year’s rematch, which will play out Saturday at 6 p.m. central at Vaught-Hemingway Stadium. Ole Miss coach Hugh Freeze expects the usual emotion from both sides of the regional rivalry, but for a Rebel team that’s trying to keep its momentum going following last week’s 31-point pasting of Georgia, it’s the next chance to improve.

Ole Miss is a 14.5 point favorite.  The game is either on ESPN 2 or ESPN U or the SEC Alternate channel.

“I don’t think any time you talk about revenge or any of those things they are very helpful, so I am not big on that,” Freeze said. “I am about preparing as good as we can prepare to play a very good Memphis team. I know that the game means a lot to our fan base and their fan base, so some emotion comes with that, hopefully for our kids, too.”

Redemption would be an awfully easy source of motivation.

Ole Miss (2-2) took a No. 13 national ranking to Memphis last year and built a quick 14-0 lead on the Tigers, whose offense was equally as prolific with future first-round pick Paxton Lynch at the controls. But the Rebels’ offense eventually stalled, Lynch torched Ole Miss for 384 passing yards and three scores and Memphis outscored Ole Miss 37-10 the rest of the way to notch its first win over a ranked opponent since 1996.

“(The defense) played horrible last year,” Youngblood said. “We gave up I think 500 or 600 yards or something to them, so we need to come out and play a good game kind of like we did this last Saturday.”

The offense hasn’t been much of a problem since. Ole Miss scored 52 points in its overtime loss to Arkansas three games later and has put up at least 34 in each game since while piling up more than 500 yards the last two times out.

“That was a turning point for us last year honestly,” tight end Evan Engram said. “Nobody has stopped our offense since that game. We’ve been a great team all around since that game, so that was definitely kind of a kick in the butt as far as getting us on the right track.”

The defense will be tested again by a Memphis offense that’s been just as potent under first-year quarterback Riley Ferguson, a junior college transfer who originally signed with Tennessee. The Tigers (3-0) are averaging nearly 52 points a game after rolling up 77 in a rout of Bowling Green last week, though the Rebels will be by far their stiffest competition to this point with Memphis beating up on Southeast Missouri State and Kansas in their other wins.

But when it comes to the Tigers, Ole Miss isn’t concerned about anything in the past.

“I do think (revenge) is overrated,” Youngblood said. “We always say the past is a point of reference, not a destination. We’re certainly going to look at the past and say they were a good team and they beat us fair and square, but we’re hoping to take care of business this year as we need to.”