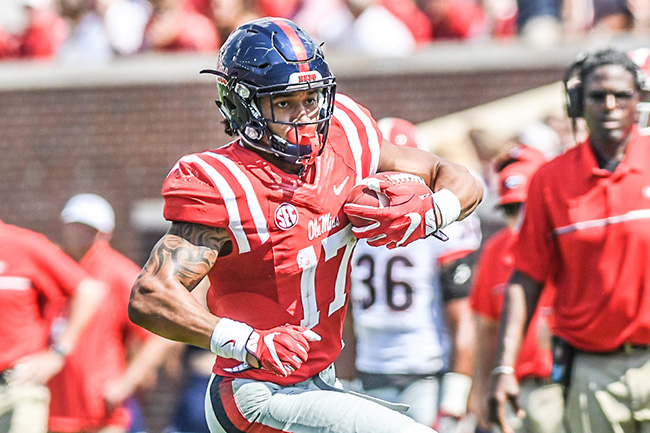 Ole Miss’ Evan Engram catches a pass against Georgia at Vaught-Hemingway Stadium in Oxford on Saturday, September 24, 2016. Defenses have had their hands full with Engram and the rest of an Ole Miss offense that’s already racked up 24 pass plays of 20 yards or more. (Bruce Newman)

Ole Miss’ offense isn’t unlike most in its attempt to maintain some type of balance, but with Chad Kelly back to pitch the ball around to one of the nation’s deepest group of wideouts, there’s no mistaking the Rebels’ identity.

“As those guys go, so do we,” offensive coordinator Dan Werner said.

And they’ve been going deep. A lot.

Many of Ole Miss’ 326.5 yards passing per game are being picked up in chunks. Ole Miss’ 14.5 yards per completion rank 21st nationally while nearly 30 percent (24) of Kelly’s 85 completions have covered at least 20 yards with five of his 12 touchdown passes going the same distance.

Kelly’s longest scoring toss of the season went 63 yards to tight end Evan Engram with some help from a blown coverage in Alabama’s secondary, but the completions haven’t always come that easy. Van Jefferson beat his defender to haul in a 20-yard score late against Florida State while freshman A.J. Brown won a jump ball over Alabama’s Marlon Humphrey for a 37-yard touchdown. Last week against Georgia, DaMarkus Lodge was interfered with by Jawuan Briscoe but still snagged Kelly’s 55-yard heave early in the second quarter.

Eight different Rebels have a catch of at least 30 yards.

Senior Quincy Adeboyejo is the veteran of the receiving corps, yet his numbers show just how deep the Rebels are at the position with his 106 yards being sixth-most on the team. Damore’ea Stringfellow has caught 14 passes for 211 yards while the emergence of Lodge (133), Jefferson (165) and Brown (157), a true freshman, has lengthened a list of weapons at Kelly’s disposal that doesn’t even include DK Metcalf, who was emerging as a red-zone target before a broken foot cost him the rest of his freshman season.

But nobody’s been more lethal than Engram, who leads all tight ends nationally with 26 catches for 397 yards and a team-best three touchdown receptions. With defenses having to worry about the Rebels’ playmaking ability on the outside, it’s helped lead to a revival of sorts over the middle for Engram, who had just 38 receptions all of last season.

“If you want to double (Engram) inside, then there are some people outside that are in one-on-one situations,” Ole Miss coach Hugh Freeze said. “You’ve got to feel really good about that with String(fellow) and Lodge and Van and (Markell) Pack and Quincy and those other guys. You’ve got to decide, and I think that Evan benefits from that.”

Opponents have yet to find an answer. Kelly and his receivers are taking advantage one fling at a time.

“They’ve been doing that all year,” Werner said.