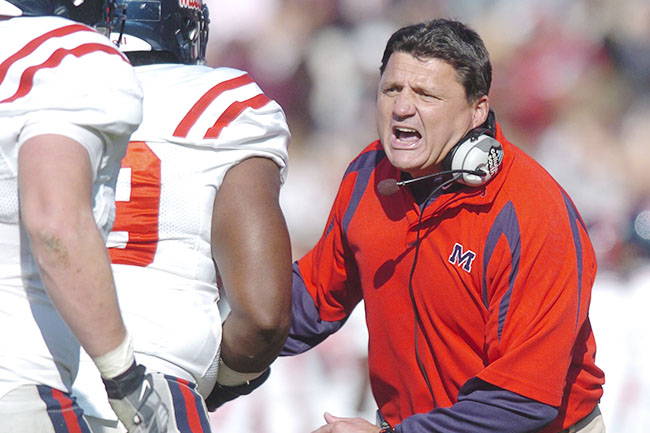 Hugh Freeze is in his fifth season as Ole Miss’ coach and just his eighth as a head coach at any college.

Freeze has Ed Orgeron to thank for getting him started.

Freeze said “literally my stomach was sick” when he learned of Les Miles’ firing at LSU on Sunday, but the vacancy created an opportunity for another promotion for Orgeron, the former Ole Miss coach who will be the interim at LSU for the rest of the season.

It’s the second interim job for Orgeron, who led Southern Cal to a 6-2 record in 2013 after Lane Kiffin was let go. Orgeron, who was previously serving as LSU’s defensive line coach, hasn’t had another full-time head coaching job since he went 10-25 during his three-year stint at Ole Miss from 2005-07, but it was during that time that Freeze got his first on-field college coaching job when Orgeron pegged him to coach tight ends before the 2006 season after Freeze spent a year as assistant athletics director for football external affairs.

Two years later, Freeze got his first head job at Lambuth before landing at Arkansas State in 2011 and ultimately back at Ole Miss in 2012.

“I’m so indebted to him for giving me an opportunity,” Freeze said Wednesday. “There’s no doubt I would not be where I am today without him giving me a chance and trusting me just one year after an off-the-field spot to be able to go on the field and coach for him.”

A more upbeat practice routine is something Orgeron said he picked up on at USC and will continue to incorporate at LSU “instead of just grinding (the players) and working them so hard that eventually it’s just not worth it.” Freeze said he sensed some changes in Orgeron after the two talked once Orgeron left USC and could see similar success for Orgeron in Baton Rouge.

“Every year, we’re trying to learn maybe a better way to be a head coach, and I think he’s got some of the experiences that are going to help him right now,” Freeze said. “Won’t shock me at all for him to do real well.”

Freeze will go up against his former boss when No. 16 Ole Miss travels to LSU on Oct. 22. Next up for the Rebels (2-2) is a home date with Memphis on Saturday at 6 p.m.