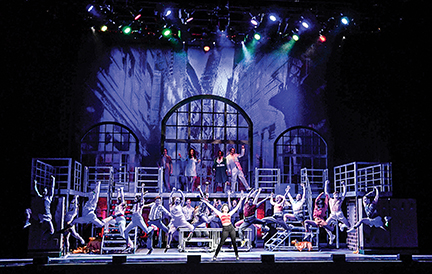 FAME- the Musical National Tour stops in Oxford tonight at the Gertrude C. Ford Center for the Performing Arts.

“Fame – The Musical” makes a stop at the University of Mississippi’s Gertrude C. Ford Center for the Performing Arts this week as part of the acclaimed production’s North American tour.

The musical is set for one performance tonight at 7:30. Tickets, which range from $57 to $69 each, are available at the UM Box Office in the Ole Miss Student Union and online at http://www.fordcenter.org/event/fame-national-tour/.

Based on the hit movie and Emmy Award-winning television series, the production tells the story of driven high school students admitted to an exclusive performing arts school in New York and their competitive nature as they strive to develop their talents in the industries of music, dance and theater.

The young artists navigate their time through their four years of high school in the 1980s, with all the triumphs and tribulations that accompany them, while captivating audiences with acclaimed choreography and Academy Award-winning music.

“We can’t think of a better way to open the Ford Series than with ‘Fame’; it’s a great story and very entertaining,” said Kate Meacham, Ford Center marketing director. “It should be a very enjoyable evening.”

“Fame” was originally conceived and developed by David De Silva, who has been involved in the creative process for the movie, television series and musical.

De Silva hopes the Oxford and Ole Miss community attend the performance, not only to see a critically-acclaimed musical, but also to enhance their own exposure to the arts.

“Art is a good part of anyone’s education, but when there are budget problems, it’s the first thing to go,” he said. “The beauty of art is that it prepares you for everything. It allows you to build confidence and learn to project your personality.”