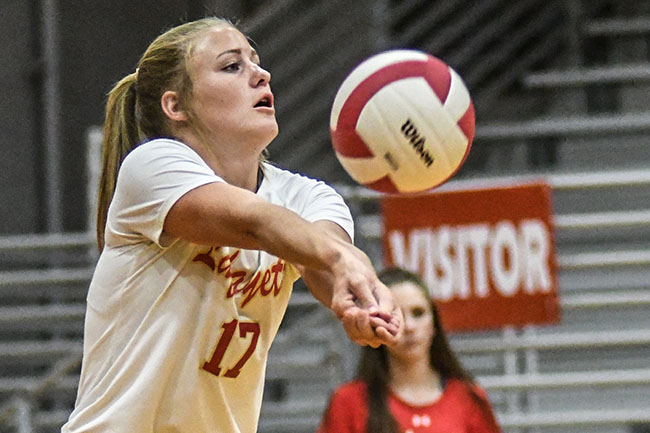 If something special happens for the Lafayette volleyball team this season, it will have started on Thursday night.

“When we went to Caledonia, we didn’t show up, but they took it to us,” Lafayette coach Clint Jordan said. “They didn’t give us a chance to get out of it. … This was year defining. To go down 2-0 and you look terrible and somehow you gut out a Game 3. Then, Game 4 kind of goes your way and then you get into Game 5 and have all the momentum.”

When the third set started, Lafayette looked like a different team as the Commodores took their first lead of the match at 3-2. Caledonia came back, using a 10-5 run to tie things up 15-all. The third frame was tied on four different occasions before Lafayette pulled it out to avoid the sweep.

From there, the Commodores had to fight back once again, falling behind 13-3 in the fourth set and using a 14-4 run of their own to tie the score 17-17. An 8-5 run tied the match at two sets a piece and forced a fifth and deciding set.

“I said, ‘How do you want to be defined?,’” Jordan said of what he told his team before the third set began. “Those first two games were not us. We were without Orianna (Shaw) tonight, and she’s a big part of what we do.”

Shaw had to have emergency wisdom tooth removal and chose to do it during the regular season instead of missing the playoffs.

Since the first match against Caledonia, Lafayette has gone on a nine-match winning streak, including Thursday’s win. The run has helped the Commodores feel good about a playoff berth, but they have their eyes on a prize that Jordan was not sure was possible with his young team before the season began.

“We’ve gone on a nice run here, and it’s due to our kids playing well together,” Jordan said. “I was hopeful we would (be in this position). I didn’t really know what to make of this group. We still have nights where I’m not sure what we’re doing. … Tonight and all year we’ve been able to not let those things bother us.”