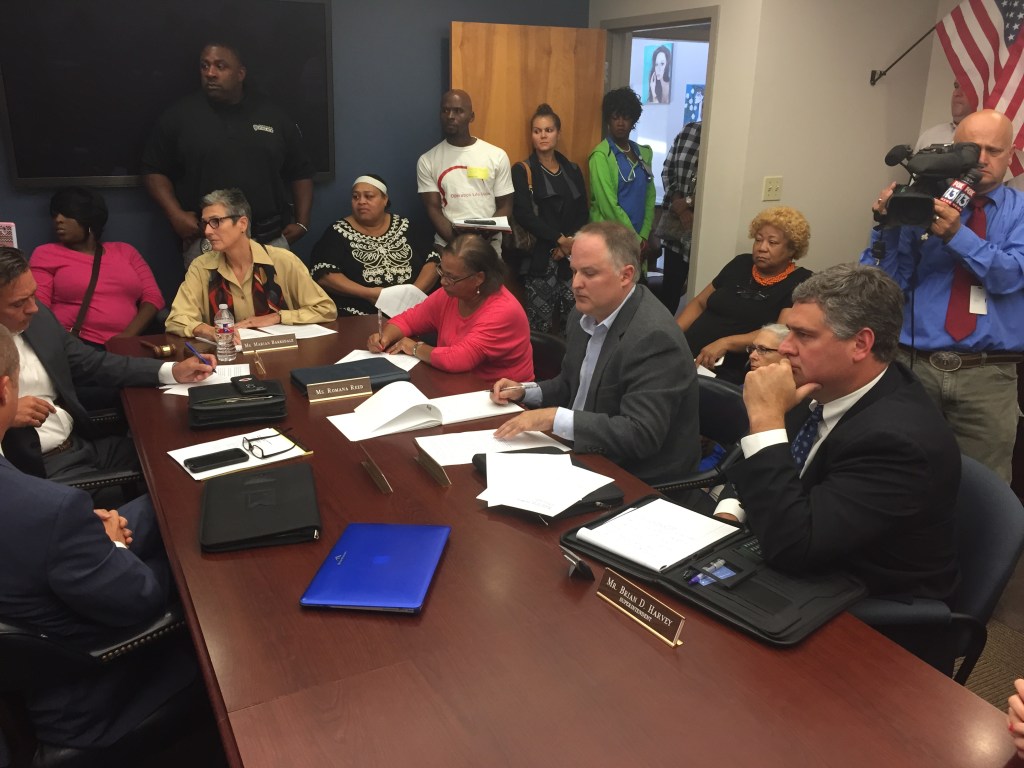 The Oxford school board went into executive session at 1:06 p.m. to discuss a personnel issue. Superintendent Brian Harvey is meeting with them.

About 200 people gathered on the lawn in front of Oxford Middle School Thursday night in protest to reports that  the school district might be considering closing the achievement gap with a separate opt-in school for students from low-income families.

Harvey said the concept of a separate school and any other educational solution focused on low-income students is based on the correlation between poverty and performance in school.

Reaction to the story spread far and wide Thursday, gaining national attention and sparking discussion throughout the Oxford community. People of all races took to social media within hours, coming out against the idea of a separate school for children on free lunch plans. Many called the idea racist and said it returned Oxford to the days of segregation. Some even threatened to pull their students out of the district altogether.

However, Superintendent Brian Harvey told the EAGLE Thursday afternoon that no part of the achievement gap discussion has reached serious consideration in terms of solutions.

“It’s one of many things we were looking at,” he said.

At the rally, Harvey told the crowd that the district is not building a separate school for students from low-income homes.

“We are not creating a free or reduced school,” he said. “That’s not happening. We heard a presentation about it. That’s as far as it’s gone.”

The school days are eight hours long and students attend school 210 days a year. The curriculum consists of intensive reading programs, accelerated math courses and mandatory etiquette classes, according to the ULLC website.

The ULLC has worked in various states along the eastern and southern coasts, including Louisiana, Georgia, South Carolina, New York, Maryland, Virginia and Texas.

Based out of Virginia, the group is described as a “public, but praying, company.”

On Monday, the Oxford School District approved sending two board members to the Achievable Dreams Academy in Newport News, Virginia, in November.

Harvey said the district is trying to find answers to solve its achievement gap in Oxford schools, where students from home with higher incomes are achieving higher grades and tests scores compared to students from low-income homes.

“We have one of the largest, if not the largest achievement gap in the state,” he said. “I don’t know if this type of program is the answer. I don’t know if we have a spot for this. But it’s my job to provide the board with options and it’s worth having the discussion.”

OSD board president Marion Barksdale reiterated Thursday night that the school is not starting a school for low-income or struggling students.

“We are in the early stages of looking at programs that have had success in closing the achievement gap,” Barksdale told the EAGLE. “We fully intend to involve the community in developing plans. This district’s incremental success is not enough for us. We know our students have tremendous potential. We are determined to find the best way to help all of them reach it.”

Even after public statements by Harvey saying the district does not have plans to build an opt-in free/reduced meal school, protests continued this morning with students skipping class and having a sit-in inside the gym at Oxford High School. Some students gathered outside of the high school to pray for the district.

Harvey sent an email to faculty and staff calling the last day “tumultuous.” “We are not starting or building a school for free and reduced students,” Harvey said in the email. “No recommendation has been made and the board of trustees has not taken action in any manner consistent with that idea.

“You have heard me discuss the achievement gap that we have in this school district for several years. I am committed to finding solutions to help all of our students.

“We have investigated two separate programs that exist specifically to reduce this gap and push more students to higher achievement. One of those programs is the Urban Learning and Leadership Center’s Social, Academic, and Moral Education (S.A.M.E) model.

“This model is good for all students and it is one that has shown tremendous results in some other communities. The other is the Advancement Via Individual Determination (AVID) model.

“It is a nationwide program that has been in existence for many years with some well-documented results. We are investigating several options and will continue to push for higher achievement for all of our students.

“No decision will be made without public discussion and support from our students, teachers, parents and community.”

Also this morning, the Oxford School District Board of Trustees announced a special called meeting at noon today at the Central Office.

The only item on the agenda is a discussion regarding a response to concerns stemming from the Charger article. The EAGLE will post updated information after the meeting on its website at www.oxfordeagle.com.