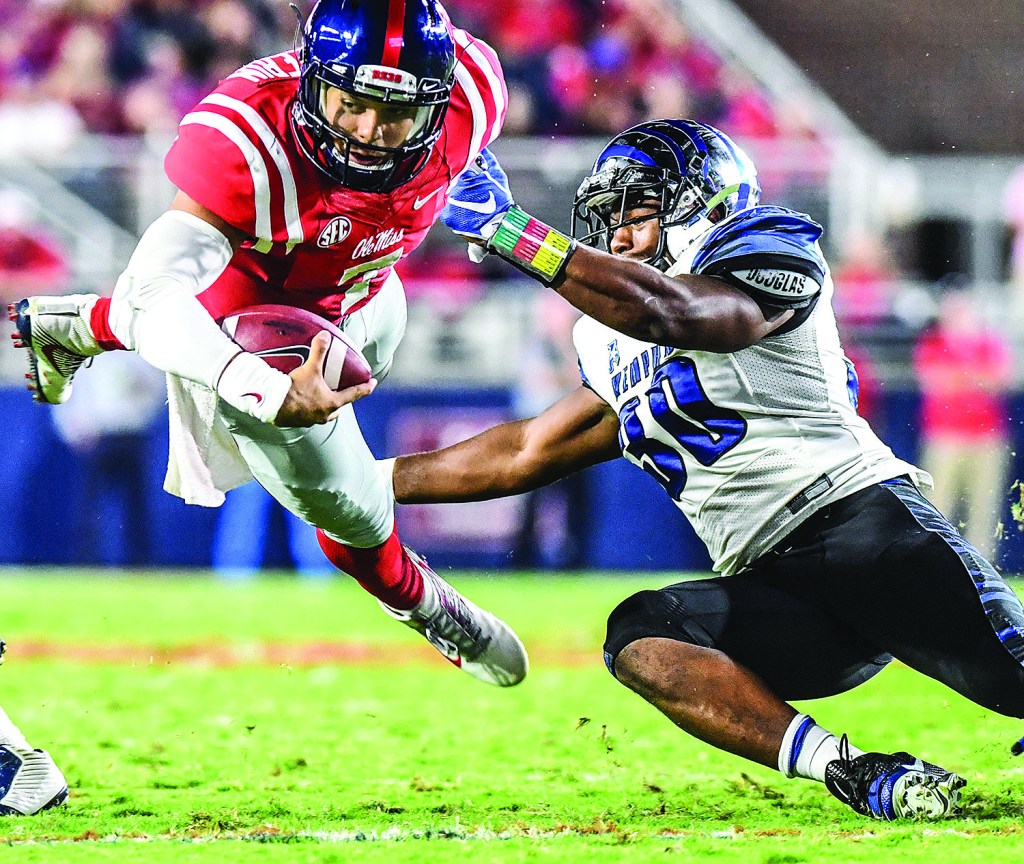 Ole Miss quarterback Jason Pellerin (7) dives for a first down as he is hit by Memphis Tigers linebacker Shareef White (30) at Vaught-Hemingway Stadium on Saturday. (Bruce Newman)

Before the season began, quarterback Jason Pellerin knew his role. It was to provide starter Chad Kelly some support on offense in special packages and even in garbage time. Pellerin also knows this is an audition for next season to show he is will continue to be a valuable asset along with Shea Patterson.

Saturday night he started to prove he can be vital in an area that the Rebels have struggled in through the first four games of the season, Red Zone offense.

The redshirt freshman scored two touchdowns inside Memphis’ 10-yard line. The first score came with about seven minutes left in the first quarter off a one-yard run to put Ole Miss up 7-0. His second occurred with less than 90 seconds left in the half, rushing for three yards and giving the Rebels a 24-7 lead heading into halftime.

“We put formations in there for short yardage and different situations and I knew going into this game that I had to be ready for it,” Pellerin said.

Pellerin finished the night with 22 yards and the two touchdowns on eight carries.

The offense had flourished between the 20s but once Ole Miss has gotten inside the opponent’s 10-yard line or deeper, the scoring becomes more difficult for a team struggling to establish a run game. Pellerin is and has been viewed as the missing key to that lock and he has proved it in the first five games of the year.

“He’s just another dimension,” Kelly said of Pellerin. “Just a big running back, tight-end. He can throw the ball. He can do it all. Anytime we can get Jason in there to make plays and run hard that’s awesome.”

Against Georgia last week, Pellerin rushed for 15 yards and a touchdown on four carries. Two weeks prior to that, against Wofford, he had his number called for the first time in his Ole Miss career and rushed for 27 yards and a score on six carries.

“We started in Wofford week, just whenever my number’s called I have to be ready,” Pellerin said. “Obviously the Wofford game, Georgia game and (Memphis) it’s been a lot more reps. I’m honored by it.”

Through the air Pellerin is 4 for 8 for 34 yards and two touchdowns. He has also thrown two interceptions late in games.

“We actually used (Pellerin before the red zone), too, just to keep people honest,” offensive coordinator Dan Werner said. “He’s big and strong and smart. So, he can get us some positive yards.”