Ole Miss pulls away for win over Memphis 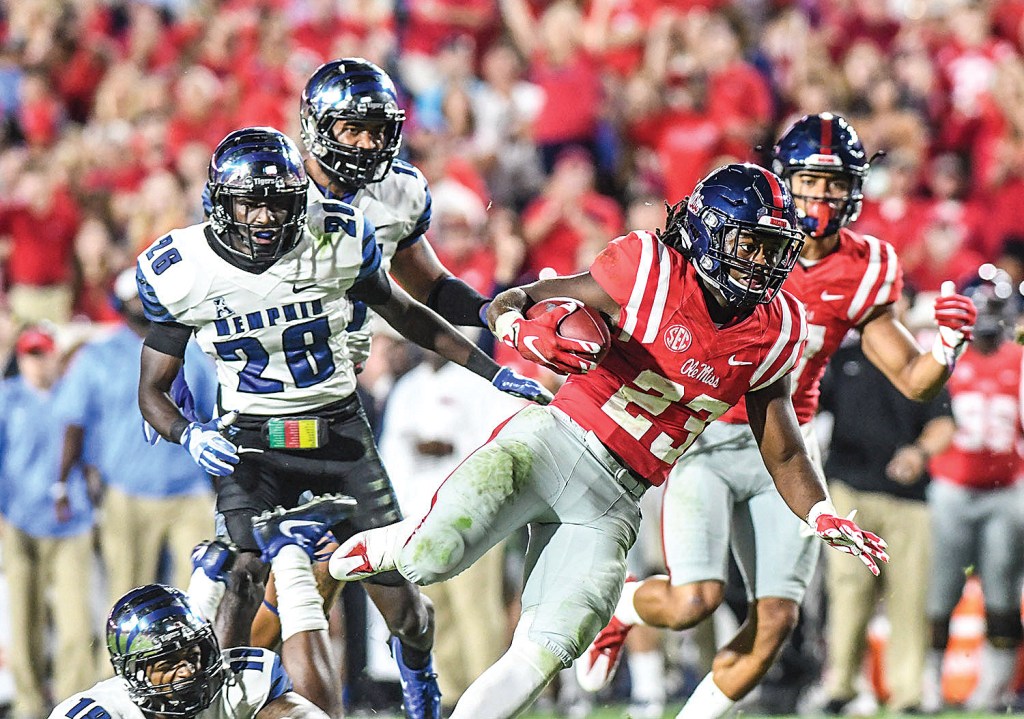 Ole Miss running back Eugene Brazley (23) gets past Memphis defensive back Dontrell Nelson (10) to score in the 4th quarter at Vaught-Hemingway Stadium in Oxford, Miss. on Saturday, October 1, 2016. The Rebels won 48-28. (Bruce Newman, Oxford Eagle via AP)

Memphis once again delivered some blows to Ole Miss.

This time, the Rebels hit back.

Ole Miss got 361 yards passing from Chad Kelly but received plenty of help from Jason Pellerin, Eugene Brazley and an opportunistic defense, and the 16th-ranked Rebels pulled away to avenge last year’s loss to Memphis with a 48-28 win Saturday in front of 65,889 at Vaught Hemingway Stadium.

“I want to be able to go to Memphis and act like we won the game, so now I can feel like I’m welcomed in Memphis,” Kelly said.

Pellerin often came on in the Rebels’ jumbo package to relieve Kelly the closer the Rebels (3-2) got to the goal line, running for a pair of touchdowns. Brazley had 124 yards and two touchdowns on just 13 carries while Akeem Judd added 108 yards as the Rebels balanced out their offense more than usual with a season-high 263 yards rushing.

Ole Miss had two different 20-point leads only to see the Tigers keep coming. Memphis got within a score at 27-21 with a 99-yard drive late in the third quarter capped by a 1-yard run by quarterback Riley Ferguson, whose only two scores came on the ground, but the Rebels answered seven plays later on Kelly’s 12-yard touchdown pass to Evan Engram.

“(That touchdown) was big,” said Kelly, who also had an interception. “We had a really good game plan going in, and we knew the only people that could stop us is ourselves.”

Things weren’t completely comfortable for the Rebels until Brazley scamped 32 yards on third-and-15 to give Ole Miss its final three-score lead with 5 minutes remaining. Brazley also scored on a 6-yard run early in the fourth quarter.

“We worked really hard on a plan to rush the ball against these guys,” Ole Miss coach Hugh Freeze said. “They do a lot of different stuff. You can always be one play behind against them because they’re so multiple in what they do. … What we ended up getting, Eugene is a little better at. He’s a little more patient and has a little bit more of a burst when he gets that crease. Excited for him. He’s a great kid. He’s kind of waited his turn.”

Ferguson threw for 343 yards but was constantly pressured by Ole Miss’ defensive front and was intercepted three times. Safety Zedrick Woods had two of them, including one he returned 31 yards in the first quarter for the Rebels’ second pick-six in as many weeks.

Ole Miss sacked Ferguson twice, hurried him five times and had seven tackles for loss while forcing a season-high four turnovers. The Rebels also held Memphis, which came in averaging more than 51 points a game, to 3.8 yards a carry.

“We’ve been on the other end of that this year where the turnovers we felt like cost us games,” Freeze said. “It’s certainly part of it and affects it.”

The Rebels used another fast start to get going, marching 13 plays on their opening possession to go up on Pellerin’s 1-yard touchdown run. The redshirt freshman finished with 22 yards on eight carries.

After Woods’ interception return for a score, Memphis covered 64 yards on just four plays on its next possession to answer on Anthony Miller’s 7-yard touchdown run. Memphis threatened again two possessions later, but Marquis Haynes stripped Ferguson on a sack with D.J. Jones recovering for the Rebels.

Pellerin kept Ole Miss’ ensuing drive going with a 3-yard run on fourth down before capping the drive with another 3-yarder to make it 24-7, a lead the Rebels stretched to 27-7 at the half.

“We’ve got a lot of formations in there for short yardage and different situations,” Pellerin said. “I knew going into this game that I had to be ready for it.”