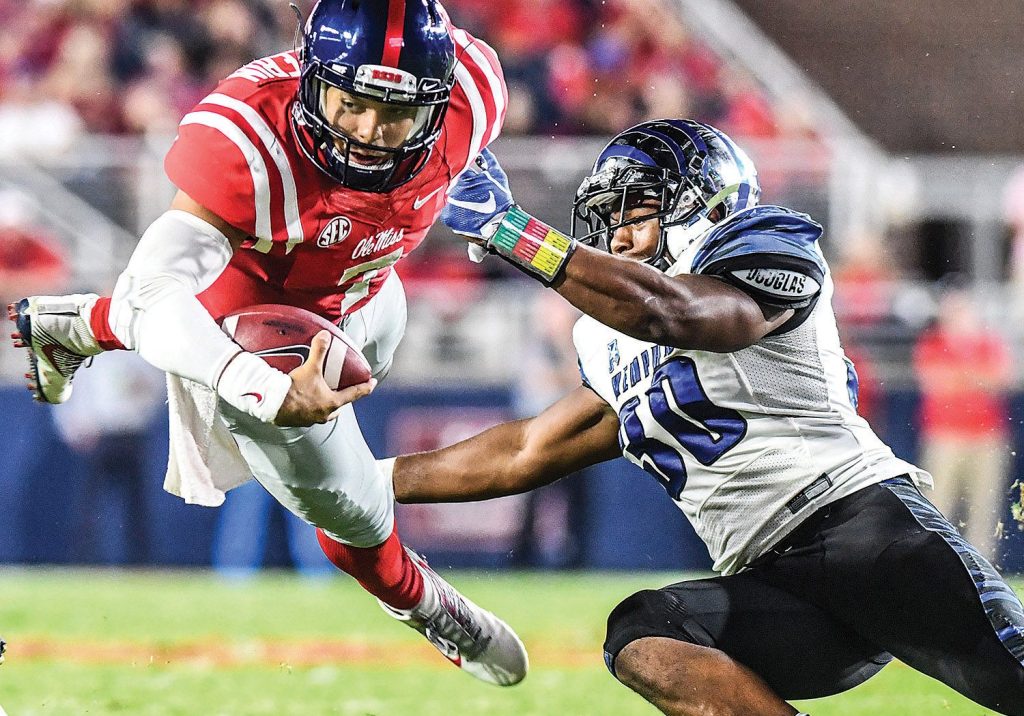 Ole Miss quarterback Jason Pellerin (7) dives for a first down as he is hit by Memphis linebacker Shareef White (30) at Vaught-Hemingway Stadium in Oxford, Miss. on Saturday, October 1, 2016. (Bruce Newman, Oxford Eagle via AP)

We will have live updates from Vaught-Hemingway Stadium today. So bookmark this page and check back this evening at game time.

Memphis beat Ole Miss last season 37-24 in Memphis, but that was with former coach Justin Fuente, who is now at Virginia Tech, and former quarterback Paxton Lynch, who is now in the NFL.

While Ole Miss has had some ups and downs in September, the Tigers haven’t even been tested. Memphis has won its three games by an average of more than 40 points, including a 77-3 victory over Bowling Green last weekend.

Ole Miss will counter with an offense that’s averaging 40 points per game. The Rebels built a 45-0 lead last week over then-No. 12 Georgia before settling for the 45-14 victory.

FINAL: Ole Miss 48, Memphis 28. The 16th-ranked Rebels avenge last year’s loss to their regional rival and improve to 3-2 heading into an open date next week. Memphis falls to 3-1.

Woods adds to his productive night with his second interception of Ferguson. The sophomore safety also has a team-best eight tackles.

Ole Miss pieces together a nine-play, 85-yard drive scoring drive capped by a 32-yard touchdown run by Eugene Brazley, who’s been a spark for the offense with 119 yards and two scores on just 12 carries. Ole Miss 48, Memphis 28, 5:00 4Q

Memphis cashes in on the turnover with an eight-play, 80-yard scoring drive. Ferguson runs 2 yards for his second touchdown. Ole Miss 41, Memphis 28, 8:41 4Q

Kelly with an ill-advised throw off his back foot toward the end zone. It’s picked off.

While only having two sacks to show for it, Ole Miss’ defensive front has put pressure on Ferguson all night. It resulted in a hurried pass this time, which is picked by D.J. Jones. Rebels have forced three turnovers. Ole Miss take over at midfield.

Freshman safety Deontay Anderson is called for roughing the passer and targeting, which has him ejected for now. The play is being reviewed. The call stands.

Eugene Brazley caps the short scoring drive, bouncing off a defender to get in on a 6-yard run. Rebels have scored 14 unanswered points. Ole Miss 41, Memphis 21, 14:53 4Q

Momentum shifting back in Ole Miss’ favor after Memphis shanks a punt. Rebels will have it at the Tigers’ 35.

Memphis fakes a punt from its own 27 and gets 12 yards to keep the drive alive. The Tigers find the end zone three plays later on Doroland Dorceus’ 11-yard touchdown run. Big sequence in this one. Ole Miss 27, Memphis 14, 10:11 3Q

Ole Miss takes the opening possession of the second half and gets inside Memphis’ 5 on a 53-yard run by Akeem Judd. But two D.K. Buford runs from the 3 net just two yards, and a false start didn’t help. Wunderlich extends the Rebels’ lead with his second field goal. Ole Miss 27, Memphis 7, 12:39 3Q

Ole Miss using its jumbo package often early on. Rebels decided to go on fourth-and-2 near the Tigers’ 25, and Pellerin powers through a defender to pick up a fresh set of downs. Pellerin runs for his second touchdown — a 3-yarder — to increase the Rebels’ lead. Ole Miss 24, Memphis 7, 1:25 2Q

Two penalties on Ole Miss help move Memphis deep in Rebel territory, but intentional grounding backs the Tigers up before Marquis Haynes strips Ferguson on a sack. D.J. Jones scoops it up to get the ball back for the offense.

Ole Miss gets it back and faces fourth-and-4 at Memphis’ 43. Rebels punt.

Anthony Miller finishes a four-play scoring drive for Memphis with a 7-yard touchdown run around the left end. Ole Miss had a 14-0 lead in last year’s meeting between these teams, too. Ole Miss 14, Memphis 7, 14:56 2Q

Ferguson’s 41-yard completion — by far his longest of the night — has Memphis threatening for the first time. Tigers will have it first and goal at the Rebels’ 7 when the second quarter starts.

Ole Miss’ defense gets the Rebels points for the second straight week. The tight end wasn’t ready for Ferguson’s pass, and safety Zedrick Woods picks it off and goes 31 yards for a touchdown. Ole Miss 14, Memphis 0, 0:58 1Q

Memphis quarterback Riley Ferguson is 9 of 9 to start but has just 41 yards. Rebels keeping everything in front, force Tigers to punt again.

Ole Miss has announced linebacker DeMarquis Gates will not play tonight, though no reason was given as to why. Head coach Hugh Freeze will address it after the game, the school says.

Freshman running back D’Vaughn Pennamon is not dressed out in warmups.