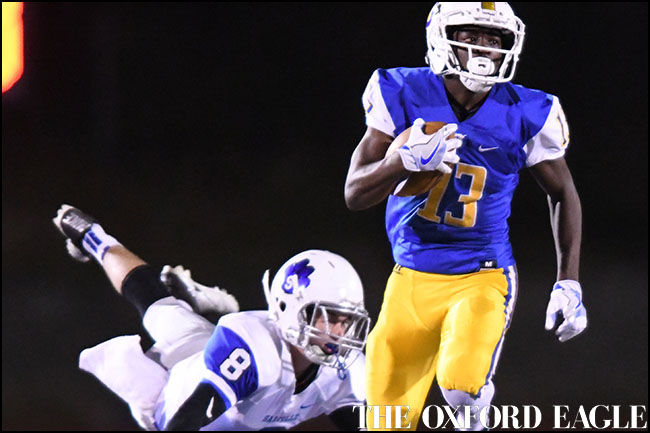 Oxford's Barry Flowers (13) gets away from Saltillo's Blake Price (8) and scores at Bobby Holcomb Field on Friday. The Chargers won 42-0.

After suffering two tough losses in a row, the Chargers needed a bounce back game on Friday. Oxford got exactly that with Saltillo, and went home with a blowout 42-0 victory. It was the first Region 1-5A win for Oxford (3-3, 1-0 1-5A) on the year after falling to West Point in their opener last week.

The Charger offense had only put up 11 total points in the two previous games, so it was key for the offense to get back on track against the Tigers.

“We played really well on the offensive line, and that’s really where it always starts,”Cutcliffe said. “I thought John Reece (McClure) played very well at quarterback. I thought he made very good decisions and we asked him to make a lot of decisions.”

McClure had struggled the weeks before, failing to score a touchdown against Lafayette or West Point. Against Saltillo, McClure finished the day 15 of 23 for 257 yds along with three touchdowns and one interception.

Cutcliffe also gave his receivers credit for the improvement in the passing game, with junior Barry Flowers catching a 75-yard touchdown and a 21-yard score and Demarea Burt catching a 25-yard touchdown. Receivers coach Logan Dodson was impressed with Flowers’ performance.

“We’ve been challenging him to put a whole game together, I know he got in for about three quarters, he really showed up and did really well for us,” Dodson said. “Big plays, blocked well backside, just did a really good job overall. Very proud of his effort.”

Flowers finished the game with five catches for 130 yards and two touchdowns.

Oxford running back Hiram Wadlington had a huge day, rushing 20 times for 161 yards and 2 touchdowns before being rested in the fourth quarter.

Equally as impressive as the offensive performance was the play of the Charger defense, who shut out Saltillo (1-6, 0-2) and added seven points of their own when senior linebacker DQ Thomas returned a fumble 48 yards for a touchdown.

“We really challenged our guys to put together a complete game,” Cutcliffe said. “We felt like we played really well defensively the past two weeks, but we just gave up the big play. We challenged them tonight to eliminate the big play and to be consistent and not have any lapses and allow a big play and I really was proud of how they did that.”

With their third win under their belt, Cutcliffe thinks he knows what the Chargers have to do to stay on track in the coming weeks.

“I think we have to keep putting together great week’s of practice, I think that’s really where it al starts, then we just have to continue to do that and make sure we’re playing great throughout the season,” Cutcliffe said.

Oxford returns to the road next Friday as they travel to Lewisburg.