A powerful Hurricane Matthew 2016 moved slowly across the Caribbean Sea Sunday on a track that authorities warned could trigger severe devastation in parts of Haiti.

Further out in the powerful storm’s future, a strike on the United States East Coast, along the highly-populated Interstate 95 corridor, reminds a possibility. Major U.S. cities including Washington, D.C. and New York City remain in the potential Hurricane Matthew 2016 path.

How likely is a U.S. East Coast strike on a city like New York?

Here is the latest forecast, according to Accuweather: “Initially, Matthew will emerge out of the Caribbean as it tracks northward between an area of high pressure over the Atlantic and a dip in the jet stream over the eastern U.S. and Gulf of Mexico, according to AccuWeather Meteorologist Mike Doll.

“The next key weather system will likely be a storm system set to track into the central U.S. by Tuesday.

“If that system is slower to reach the eastern U.S., the chance that Matthew hits the Carolinas is greater,” Doll said. If the track were to track close to the coast, significant impacts from rain, wind and flooding would be possible.

‘If the system is faster, it could then pick up Matthew and kick it out to sea,’ Doll said.” 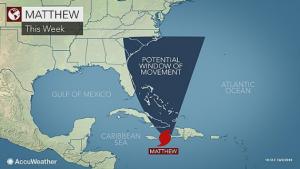 Meanwhile, Hurricane Matthew 2016 had winds of 140 mph (220 kph) as it moved northwest and Hurricane Matthew’s path 2016 is expected to take the storm’s center across or very close to the southwestern tip of Haiti late Monday before reaching Cuba, according to the U.S. National Hurricane Center in Miami.

A hurricane warning was in effect for Jamaica, Cuba and Haiti. Forecasters said the southern Haitian countryside around Les Cayes could see the worst of it.

“Wherever that center passes close to would see the worst winds and that’s what’s projected to happen for the western tip of Haiti,” said John Cangilosi, a hurricane specialist at the center. “There is a big concern for rains there and also a big concern for storm surge.”

Matthew is one of the most powerful Atlantic hurricanes in recent history and briefly reached the top classification, Category 5, becoming the strongest hurricane here since Felix in 2007. The hurricane center said it appeared to be on track to pass east of Florida through the Bahamas, but it was too soon to predict with certainty whether it would reach the coast United States.

The government of Haiti opened 1,300 emergency shelters across the country, enough to hold up to 340,000 people. Authorities broadcast warnings over the radio and across social media, trying to counter a common tendency for people to try to stay in their homes to protect them during natural disasters.

“The shelters are open but I don’t believe we have anyone inside them just yet,” said Joseph Edgard Celestin, a spokesman for the civil protection agency.

Teams of civil protection officials were walking the streets of Les Cayes urging residents to secure their homes, prepare emergency kits and warn their neighbors. Many Haitians appeared unaware of the looming hurricane.

“No, I haven’t heard anything about a bad storm coming here,” farmer Jean-Bernard Mede said with a concerned expression as he took a break from walking three cows along a dirt track outside the town of Leogane. “I’ll do what I can for my animals and my family.”

Forecasters said Matthew was expected to dump 15 to 25 inches (40 to 60 centimeters) of rain over southern Haiti, with a few places getting as much as 40 inches (100 centimeters).

The impoverished country is particularly vulnerable to devastating floods because of the steep terrain, with hillsides and mountains often devoid of the trees that hold back the water because they have been cut down to make charcoal for cooking fires. Many people often live in houses that are not able to withstand a storm, typically built of scraps of plywood with flimsy corrugated steel roofs.

The hurricane earlier had been projected to move closer to Jamaica, but the risk to the island seems to have diminished somewhat.

“The center of the system is looking more likely that it will pass to the east of Jamaica but it won’t miss it by that much, so they are still going to see impacts,” Cangilosi said. “The impacts are maybe going to be a little lower there than they would be in Haiti and eastern Cuba.”

After passing Jamaica and Haiti, Matthew is expected to reach Cuba, potentially striking near the U.S. Navy base at Guantanamo Bay, where authorities were evacuating non-essential personnel, including about 700 family members of those serving there.

Everyone remaining behind was being told to take shelter, said Julie Ann Ripley, a spokeswoman. There are about 5,500 people living on the base, including 61 men held at the detention center.

The forecast track would also carry Matthew into the Bahamas. Cangilosi said the storm appeared to tracking toward the U.S., but it was too soon to say if it would affect Florida or parts of the East Coast.

“The message we have for people in Florida is just closely monitor Matthew,” he said. “We can’t rule out any significant impacts just yet but the indications at this point are that the center of it will move to the east.”