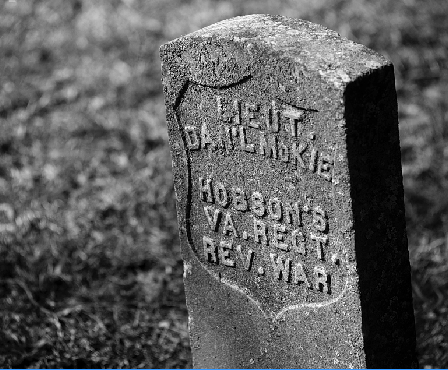 Lt. Daniel Green McKie is the only Revolutionary veteran buried in St. Peter’s Cemetery in Oxford.

I want to tell you the story of one earliest immigrant to Oxford. He holds the distinction of being the only Revolutionary veteran buried at St. Peter’s Cemetery. Remember that Oxford and Lafayette County were chartered in 1837 and 1836 respectfully.

This would have been some 50 years after the signing of the Declaration of Independence, so anyone who had been a veteran of the war would have been in their 70s and 80s, which would have been far past the life expectancy of a person living during the first half of the 19th century.

The veteran was Daniel Green McKie, formally of Virginia and later South Carolina. There are still some of his descendants still living in this county and his story is quite interesting. It was said by one of his descendants that far after the war he dressed in Colonial attire that you would have seen on George Washington or Thomas Jefferson and others of the Colonial period.

McKie was born on May 6, 1759 in Luenberg, Virginia. He was one of three sons born to a Scottish immigrant, Michael McKie. At age 19 in 1778, he joined Hobson’s Virginia Regiment under the command of General Nathanael Greene. He fought through the entire Revolutionary War and won praise as a soldier and patriot at the Battles of Stone Mountain and Guilford Courthouse. He was rewarded with a promotion to the rank of Lieutenant.

The Battle of Guilford Courthouse was fought on a cold and dreary day on March 15, 1781. It was near a small crossroad village in what was then the backcountry of North Carolina. Today, the battlefield sits on the northern edge of Greensboro and is preserved as a much-visited battlefield of the Revolutionary War.

It is the site of the largest land battle fought in North Carolina and was the culminating combat in a two-month campaign that began on the Catawba River in southwestern North Carolina in January of 1781. Gen. Greene was able to outrun and out-maneuver the British army under Lord Cornwallis. This gave Greene time to strengthen his army so that his men might be better matched for the well trained and more disciplined adversaries.

Most historian of this period agree that the Battle of Guilford Courthouse was the pivotal event that led ultimately to the surrender of the British army at Yorktown, Virginia, in October of 1781. Cornwallis’ army was so badly mauled by Greene’s men at Guilford Courthouse that hey had to seek protection at their garrison at Wilmington.

The British had a hard earned victory and an expense victory over the Continentals at Guilford Courthouse. Later Cornwallis appears, cowering behind the trenches of Yorktown, waiting to be rescued from the hands of Washington and the Continental army, which had marched south to finish off what was left of Cornwallis’ army. The opponents of the war back home in England seized upon the casualties suffered and held them up as an example of why Britain should get out of the war.

On March 14, 1794, Lt. McKie would marry Frances Herndon, a direct descendant of Sir Dudley Diggs, a Colonial governor of Virginia. They would move to Columbia, South Carolina and raise a family of six boys. After a reversal of fortune in 1836, the lure of cheap land in Mississippi due to the Chickasaw Cession would cause McKie to move his family once again.

In 1836 McKie was 77 years old when his last move was made. His family members would later remark that he was a magnanimous man and his unselfishness and generosity was a leading factor in his financial downturn. His debts were so great that he seek to find a new fortune in the lands ceded by the Chickasaw in north Mississippi.

McKie would only live three years in Mississippi and upon his death on Nov. 16, 1839 he would be buried in an unmarked grave at St. Peter’s Cemetery. It was not until Dec. 7, 1927 that a marker would be placed on his grave.

The David Reese Chapter of the Daughters of the American Revolution would hold a ceremony on the day in 1927 and place a marker on his grave. The event was a grand event and would be attended by his granddaughter, Mrs. S.A. Murray of Oxford and his grandson, Lee McKie of Brinkley, Arkansas. Local Girl Scouts and Boy Scouts were in attendance, along with the ladies of the DAR.

McKie’s granddaughter would make a short speech about her grandfather and she would recall how her father and grandmother would attest to her grandfather’s character and his personal appearance. Mrs. Murray was quoted in the Oxford EAGLE as saying, “He must have been a picturesque figure as he always wore full Colonial dress, exactly as we see in pictures of Washington and LaFayette.”