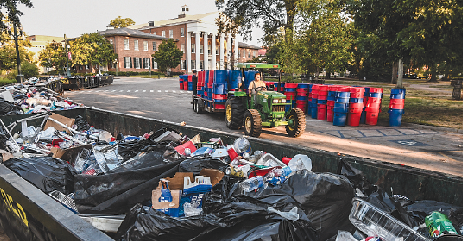 When the Ole Miss Rebels play at home in Oxford, thousands of fans flock to the Grove or local bars and restaurants. Many locals also hold watch parties at home.

It can be a ton of fun for Rebel fans, but it also adds up to a ton of garbage. Several tons, actually.

Oxford Environmental Services Superintendent Amberlynn Liles says the city has to bring in extra 18-wheelers to transport the garbage on Mondays following a home football game.

Liles said her crews were prepared after dealing with move-in day this year.

“It took us about six weeks to get caught up on our apartment pick-ups after move-in,” she said. “We knew with this increase in students, it would make a difference on the amount of our Square trash pick-up and our residential pick-ups after game days.”

The compactors on the Square can’t hold the capacity of garbage a home game weekend produces, she said. The city brings in extra 30-yard roll-offs, a large dumpster you might see at a construction site.

“Last year we used about four during game weekends,” she said. “The first home game this year we used seven. Alabama game, we used nine.”

“And that’s just on the Square,” she said. “We see a lot more trash on our residential routes as well. People are renting out their homes or having guests over.”

The University of Mississippi generally handles its own trash collection through Landscape Services, but also contracts with local companies to help with game-day trash.

On game days, the university contracts with RES to provide roll-off dumpsters around the Grove and Circle.

“We also play 20-yard roll-off dumpsters in remove locations on game days in case the ones in the Grove and Circle fill up,” he said. “We place anywhere from 18 to 31 roll-off dumpsters, depending on the game.”

RES then picks up the roll-offs on Sunday morning and hauls them to the landfill.

UM Landscape Services collects the recyclables on Saturday evening after the game and places them in a recycle roll-off where they are taken to Oxford Recycling Station.

“The Office of Sustainability will sort through the recycling bags on Monday at the Oxford facility,” he said. “The university has two garbage trucks that we use to collect trash. When the trucks fill up, we take them to the local landfill to be dumped.”

Lafayette County Solid Waste Manager Ken Drewery said the county doesn’t have a noticeable difference in the amount of garbage his crews pick up Monday morning after a game.

“There’s a little more than usual but not a major difference,” he said.

Some redemption for Ole Miss before catching its breath