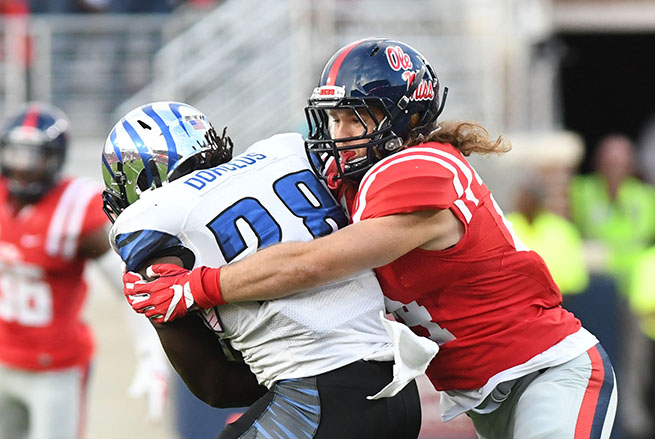 Assuming it stays healthy, the front will likely be the strength of Ole Miss’ defense all season while a young secondary going through its expected growing pains is making strides.

The same can’t be said for the Rebels’ linebackers.

The production at the second level of the defense continues to be spotty, and a revolving door isn’t helping. A position already short on depth was thinned out even more Saturday against Memphis with outside linebacker DeMarquis Gates held out because of a suspension.

Walk-on Tayler Polk got the start over Terry Caldwell in Gates’ place. Detric Bing-Dukes got his second straight start in the middle after becoming the third different player to draw a start there the week before, but everything will continue to be evaluated.

“It’s been a struggle all year long,” defensive coordinator Dave Wommack said. “Gates had to sit out the game this week. We’ve just got to find somebody at that (middle) linebacker especially that can get it done. Right now, we’re not getting that done.”

Bing-Dukes (7) and Polk (6) combined for 13 tackles, making all but one stop among the linebackers. But there are just as many breakdowns occurring leading to plays going for a lot more yardage than they should be.

As for Gates, who’s on pace to lead the Rebels in tackles for the second straight season, Freeze said it “depends on him” as to whether the junior will miss any more games. Gates is the latest to be held out by Freeze for an unspecified violation of team standards.

“It’s the same thing I’ve done with others,” Freeze said. “I’ve been very clear what my expectations are moving forward, and we’ll evaluate it every week.”

There could be more tinkering coming.

With the Rebels entering an open date before jumping back into SEC play at Arkansas on Oct. 15, Freeze said other players could get a look at the position the next two weeks. Redshirt freshman Shawn Curtis, who originally signed with Ole Miss as a linebacker before moving to defensive end in the spring, could be an option.

“We’re very thin, and we were very thin (Saturday),” Freeze said. “Next week, I’ve got a few things on my mind.”

Wommack said the defensive game plans have been simplified dramatically to try to make things easier for the linebackers. Five games in, the Rebels are still looking for the right combination to execute them.

“Whoever it’s going to be, we’re going to look at it,” Wommack said. “We’ll put something together, make a run and find a way to get better, but that was not good enough (Saturday).”